Expect a stoic silence from the Noem camp on this one...

Once upon a time, Senator Tom Daschle caught all sorts of guff from folks who wanted to beat him for having a two-million-dollar house (oops, sorry: mansion) in D.C. (or was it $3 million?). Nice houses in Washington, D.C., just don't reflect South Dakota values, do they?

With that in mind, let us turn to the McLean, Virginia, real estate transfers for October. Of 19 home sales recorded at the Fairfax County property tax office, only three were for less than $500K, all condos. Six homes went for over a million dollars. The bargain in that batch: 6134 Ramshorn Drive. Four bedrooms, three and a half baths, 3167 square feet, quarter-acre lot, sold July 30 this year for $1.02 million. 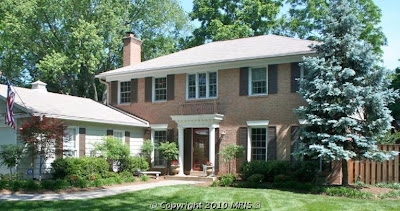 Whew! I've got four times the lot, but this swanky McLean house has 2.5 times the space and 10 times the mortgage of my humble South Dakota abode.

Castlewood? What the—oh! I almost forgot to tell you who bought this piece of the American Dream. Please congratulate new homeowners Carine and Jordan Stoick.

As I prepare to go to work in Congress, I'm focused on putting together a quality team of individuals that will help me serve South Dakota well. Jordan understands the issues important to our state, and his background and experience makes him a great person to help ensure we hit the ground running on behalf of all South Dakotans [emphasis mine; Representative-Elect Kristi Noem, press release, 2010.12.03].

Catch that? Stoick lives in a million-dollar house, worth seven times more than the median house in Sioux Falls. He lives in a swanky, exclusive D.C. neighborhood. And Kristi Noem thinks he "understands the issues important to our state." But having a big, expensive house doesn't have anything to do with one's ability to understand and fight for South Dakota, does it?

Oh, but I suppose there's a world of difference between Tom Dsachle and Jordan Stoick. Daschle was the elected Senator, the decision-maker, the man directly accountable to us South Dakotans in our $100K sod shanties. Jordan Stoick is just a staffer... the chief of staff, the man behind the scenes, the man who has Kristi's ear every day on every issue, telling her how to be a Congresswoman.

pp.s.: Is Kristi's house that big place by the Racota Valley Ranch sign on Highway 81? How much is her house worth?