Check that: it's apparently not the pipeline we have to worry about; it's those darn leaky pump stations.

Carrie La Seur of Plains Justice gets the scoop on the fourth documented leak along TransCanada's Keystone I tar sands pipeline. According to incident report #951480 filed by the U.S. Coast Guard's National Response Center, Keystone Pump Station 24 near Hartington, Nebraska, sprang a leak. The report says, "caller stated a check valve on a pressure transmitter located on the suction side of a line pump stuck open releasing 5-10 gallons of crude oil onto the ground.

The leaks must be working their way south. Check out TransCanada's Keystone system map: 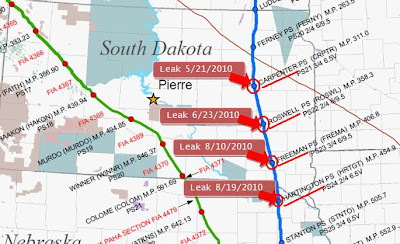 Given four incidents in three months, we are now in the clear on small leaks for 260 years. Thanks for getting those out of the way, TransCanada!