The Bureau of Economic Analysis just released its report on county compensation by industry for 2009. Average compensation per job increased 1.2%, to just about $57,000. Unfortunately, fewer people had jobs, so the total amount of compensation went down 3.2%. Some smalll relief: inflation was only 0.2%.

Two-thirds of our 3113 counties saw compensation go down in 2009. The map shows a familiar pattern (click image to enlarge): 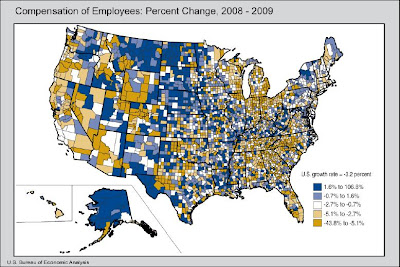 The center of the country does better than the coasts. The most populous counties generally saw larger decreases in compensation (3.7%) than medium and smaller counties (2.2%&ndash2.3%)

South Dakota looks pretty healthy, with lots of counties in the blue upper quintiles (remember, blue is good on this map, while gold shows where there's less gold). But hey, zoom in: what's that gold spot in East River South Dakota? 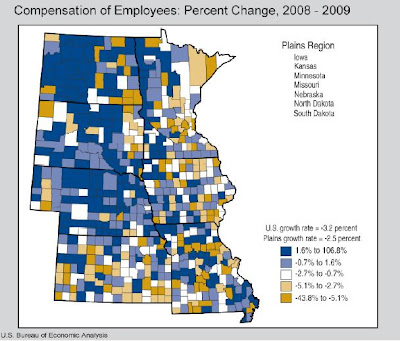 Only four counties—McCook, Marshall, Union, and Harding—saw worse declines on total compensation. Harding lost the most compensation, dropping 15.7%, with average wages per job dropping $3200 in one year. Weep not for Union County, though: they have the highest average wage per job in the state, just over $39,000.