Bob Ellis returns to writing about real South Dakota politics... but alas! He does so only to peddle hate, deception, and his persecution complex. Ellis crows about the pink flyer being circulated by his fellow fundagelicals to damage Ritchie Nordstrom's campaign for a seat on the city commission in Rapid City. 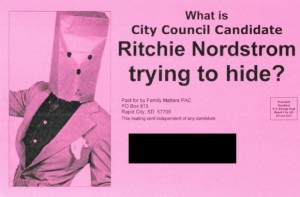 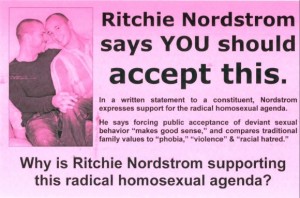 The flyer, as you can see here, is pink, because pink is a faggy color, and you sure as heck don't want any fagginess in your city government. It shows two men smiling and holding hands. You should be afraid of those faggy radicals, because they'll take over your city government and make you smile and hold hands right along with them. They'll probably give you AIDS, too, what with their shaved heads and skinny bodies.

That's what the words radical homosexual agenda really mean. That's what Bob Ellis and the Family Matters PAC want you to think when you see the pink flyer.

Never mind that Nordstrom himself says his agenda is no more radical than supporting equal rights for all and no special rights for anyone. Never mind that on the city commission, Nordstrom would be too busy paving roads, hiring cops, and balancing the budget to advance any radical agenda even if he decided to dream one up.

Just be afraid. Be hateful.

Bob Ellis at least owns his homophobia. One of Nordstrom's opponents, Steve Laurenti, sent out a mailing from the same right-wing firm that sent out the pink flyer. In his flyer, Laurenti makes vague accusations that Nordstrom is hiding an agenda against "family values." Laurenti declines to discuss homosexuality when questioned about this flyer (wait, so who's hiding what, here?); in cowardly fashion, he trades on homophobia without admitting it explicitly himself.

Ellis explodes his pink propaganda into an indictment of all liberals and the media. He groans that the press go ape exposing immoral behavior like that of Mark Foley and Larry Craig but don't go after politicians for the behavior Ellis considers immoral. Translation: supporting equal rights (which is all Nordstrom has done) is morally equivalent to sexually propositioning your subordinates or cheating on your wife in an airport bathroom.

I'll only feed Ellis's "me against the world!" complex by pointing this out, but Constant Conservative points out that 56% of Americans consider gay and lesbian relations morally acceptable. 91% consider cheating on one's spouse morally unacceptable. To equate Ritchie Nordstrom's support for equal rights in the workplace with Larry Craig's getting jiggy in the john defies the public moral sense, if not sense, period.

Alas, as Kevin Woster notes, these fag-fear flyers are "a predictable part of campaigns in the Black Hills." Fake family values PACs are willing turn up that kind of hateful heat here in East River, too.

Such campaign tactics do not seek to promote reasoned discourse about practical policy or public morality. Their aim is to get as many voters as possible to go, "Pink! Fags! Fear! NOOOO!" That stoking of hate is much more harmful to civil society than two men holding hands and smiling.