Dr. Blanchard tasks us renewable energy advocates with his argument that all of our green power sources—solar, wind, nuclear, geothermal, biomass, and even hydroelectric—suck up far more wealth in government subsidies than they produce. In his quest for policy consistency, Dr. Blanchard wishes the President would drop all energy subsidies, let the non-viable wind and solar industries die, and let fossil fuel projects (like the Keystone XL pipeline he's been so assiduously flogging) further flourish. 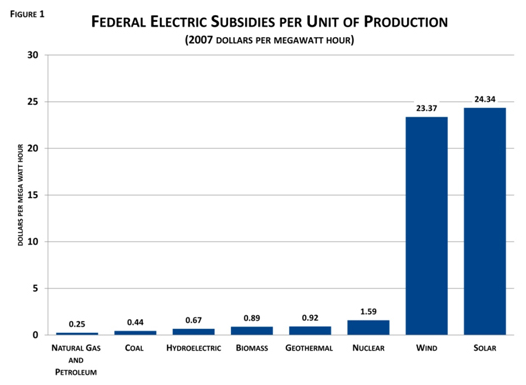 Why is Dr. Blanchard wrong? Consider first that the source of his subsidy data is a 2008 Energy Information Agency report addressing electrical energy. This report does not address all energy production and use. Nor does it address the cost of military activities to protect our oil supplies (see page 100 of the EIA report). Nor does it address the cost of environmental cleanup for federal, state, and local governments.

Consider also the narrowness of this metric. If we gauge the success of current subsidies only by how much we spend per megawatt, then the $926 million we spent subsidizing conservation (p. xxi) was a complete waste of money.

But let's focus on one major flaw in Dr. Blanchard's thinking (shared, it appears, by anti-government crusader Rep. Paul Ryan): apply his anti-subsidy reasoning with consistency throughout American history, and we might still be burning tallow and cow patties in our sod huts and taking the kids to town by horse.

As explained in the EIA report (see, for example, p. 96), the federal government intervenes in the energy market to help new industries get on their feet, expand our energy supply, and reduce costs in the long term. The federal government has provided "seed money" of this sort for every major form of energy we use today, including and especially fossil fuels.Coal, oil, natural gas... heck, even wood (made more cheaply available through big 19th century land grants) received federal support in their developing years that made energy cheaper and more abundant. Many of those subsidies continue to this day.

A September 2011 DBL Investors report calculates historical totals of subsidies for major energy resources. It finds that current renewable energy subsidies are not only not the outlier Dr. Blanchard wants us to believe; we are actually investing less in renewable resources than we invested in other forms of energy during their early years:

As a percentage of inflation-adjusted federal spending, nuclear subsidies accounted for more than 1% of the federal budget over their first 15 years, and oil and gas subsidies made up half a percent of the total budget, while renewables have constituted only about a tenth of a percent. That is to say, the federal commitment to O&G was five times greater than the federal commitment to renewables during the first 15 years of each subsidies' life, and it was more than 10 times greater for nuclear.

Adjusting for inflation, our historical investment in oil, coal, natural gas, nuclear, and even biofuels has been much greater than the money we've poured into wind and solar over the last 15 years. In what should be a more expensive start-up period, our annual investment in wind and solar has not matched the resources we have poured and continue to pour into Big Oil.

Oil and gas are cheap and plentiful because we taxpayers helped those industries get going. If we invested as seriously now in the energy of the 21st century as we did in the energy of the 19th and 20th century, we would see more renewable energy reaching the market and powering our homes and businesses. Flatten the disparity in my chart—increase our annual federal investment in wind and solar and other new energy technologies—and you'll flatten the disaprity in Dr. Blanchard's chart.