Gant Plays Economic Booster — Doesn’t He Have an Election to Run?

The chief role of state-level secretaries of state is to certify and curate the vital official documents of the state. That role means primarily acting as chief election officer to make sure nominating petitions and ballots are all properly processed. That role also includes maintaining and certifying the legality of corporate documents and protecting the integrity of the state seal.

Since South Dakota Secretary of State Jason "Arrow-"Gant can't do those things right, he's trying to pretend his job is something else. Check out his Fall 2012 "Secretary of State Economic Report." He provides us some nice charts showing that more people have filed to form corporations in South Dakota this year. But then he tries to play econometrician: 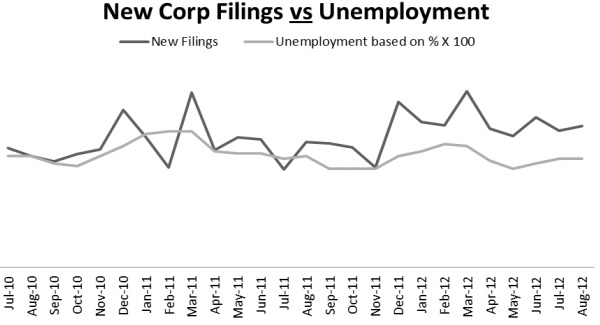 Hmmm. I look at Secretary Gant's bumpy lines on that sloppy chart (what? no vertical axes?) and I don't see any reliable three- or four-month delay. I see a general decrease in monthly filings in 2011 aligning with a general decrease in monthly unemployment. I see unemployment drop four months after the December 2011 corporate filings spike, but I see no comparable drop four months after the March 2012 spike. Most importantly, I don't see Secretary of Economics Gant provide any numbers to rigorously support his fat-fonted assertion of an economic correlation.

Then Secretary Gant really jumps his bailiwick and starts talking gross sales and projections for 2013. His graphs show increases, which is great if you think South Dakotans need to consume more stuff. But his graphs show no sources. Where does Gant get his data? Certainly not from his office, because counting tax receipts is the job of the Department of Revenue.

Secretary Gant rounds out his "Economic Report" with a Q&A profile of Boyds' Gunstock Industries in Mitchell (though Gant will be darned if uses the apostrophe in that name correctly) and a gushing booster piece for Mitchell Technical Institute. The Boyds' piece offers no insight on the gunstock company's interactions with the Secretary of State's office or the importance and ease of filing corporate documents with Secretary Gant's new online systems. Neither does the MTI blurb, although Gant provides a list of "Amazing details" about MTI, including the facts that MTI is located in Mitchell, was founded in 1968, and is a "military friendly school." Neither piece tells us anything about corporate filings or other issues relevant to the function of the Secretary of State's office.

Secretary Gant is easily amazed. He is also easily distracted from his statutory duties, none of which include acting as economic reporter or economic development booster. The Department of Revenue and the Governor's Office of Economic Development exist for those purposes.

Secretary Gant has as little official business writing economic reports as I do writing political blog posts from my desk at school. Gant and I can both exercise our First Amendment rights to engage in public discourse about whatever topics we want. But when I'm at work, any reports I write need to relate to my primary duty of teaching French. Likewise, Secretary Gant should be spending his time at the office running our elections, not pretending his job is something else.

p.s.: Secretary Gant may have no business producing economic reports, but if he's going to produce public documents outside of his proper duties, he could at least produce them well. Gant riddles his Fall 2012 report with errors: "United State," "unemployment is expect to increase...," "this quarters economic report," missing commas and hyphens, a misplaced semicolon, and this absolutely atrocious run-on: "MTI is also expanding pictured below is the construction of the newest addition the Trades Center facility on the MTI campus."

Gant does use it's properly, though... twice!