Rep. Kristi Noem hasn't thrown her support behind the Violence Against Women Act that passed the Senate with bipartisan support last week. But she has signed on as a co-sponsor to a measure to take away funding from women's health care. Rep. Diane Black (R-TN) has filed HR 217, which takes another stab at defunding Planned Parenthood and any other entity that performs abortions. HR 217 exempts hospitals and entities performing abortions in cases of rape, incest, and risk of death of the mother.

Planned Parenthood received $542 million in public support last year, including all federal, state, and local money. That's 45% of the organization's revenue. Here's the breakdown of the services Planned Parenthood provides: 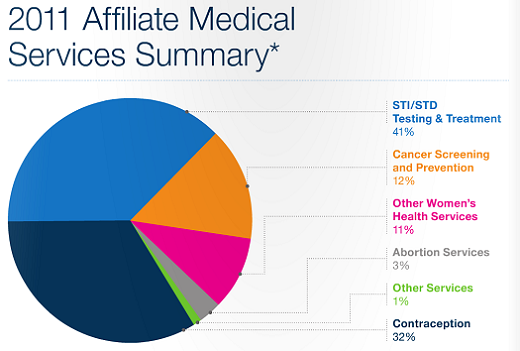 HR 217 only takes away Title X money, which is dedicated to family planning and preventive health services and which by law cannot be used for abortions. The bill would not reduce the number of abortions; it would take cancer screenings, STD testing and contraception away from poor people and would lead to more unwanted pregnancies and abortions.

Like Senator John Thune and other Republicans, Rep. Noem is thus willing to take away useful non-abortion health services to score political points on her desire to infringe on women's constitutional right to abortion.

Rep. Noem will be in Sioux Falls Tuesday noon at the VFW on South Minnesota. If you get the chance, you might want to ask her why she wants to do more harm than good for women.