While my colleagues in the South Dakota blogosphere were off listening to a pretend Senate candidate and fishing for her ad business, I went to hear a candidate who will actually be on your ballot next year.

Democratic candidate for Senate Rick Weiland kicked off his 100-town tour yesterday with a trip through familiar country, visiting Dell Rapids, Trent, Flandreau, Colman, and Wentworth before finishing the day in his hometown of Madison. He spoke to three dozen or so voters at Mochavino on Main Street.

Weiland delivered a heartfelt extemporaneous speech (expect nothing less: he's an alumnus of Madison HS debate from the Judy Kroll days). His daughter Taylor (to Rick's left) played the guitar this time.

Does Mike Rounds have boots that look this comfortable and well-worn? Some of the dust on them is from Trent, where he went door to door Tuesday noon. 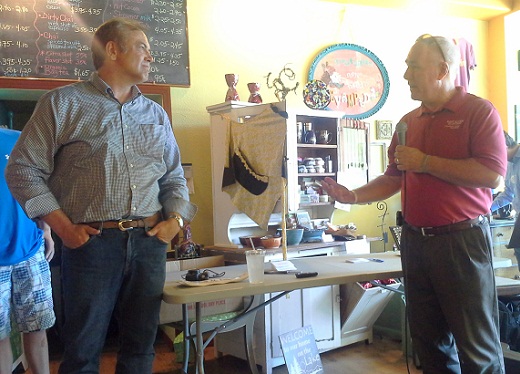 Rick offered the mic to Rep. Scott Parsley (D-8/Madison), who like every good politician (not an oxymoron) knows you never turn down a chance to speak to a crowd. Scott vouched for Rick and mentioned that he's pretty sure he'll be on the ballot with Rick in 2014, running to keep his state House seat (woe unto the District 8 GOP!).

After speaking to the thirty-some audience, Rick spent well over another hour talking with voters, press, and even one troublesome blogger (whose interview is coming up shortly!). Rick even set out pie for everyone. (Hungry but anticipating trouble, I asked about "food for votes"; Rick said his pie is FEC-approved.) He said he'd eaten three pieces already Tuesday and was going for pizza pie with his family at Skipper's afterward.

Note the line from Whitman painted on Leah Keating's café wall. It comes from "Song of the Open Road":

From this hour I ordain myself loos’d of limits and imaginary lines,
Going where I list, my own master total and absolute,
Listening to others, considering well what they say,
Pausing, searching, receiving, contemplating,
Gently,but with undeniable will, divesting myself of the holds that would hold me.
I inhale great draughts of space,
The east and the west are mine, and the north and the south are mine.

Not a bad verse for Rick Weiland to have in mind as he spends this summer driving around South Dakota listening, contemplating, and winning the hearts and minds of the electorate. Allons, Rick!