David Montgomery reports that Rep. Jim Bolin is abandoning his campaign to become School and Public Lands Commissioner to focus on fighting the Common Core education standards. Bolin emphasizes that taking up the Common Core fight full time is the "sole reason" he's quitting the School and Public Lands race. He was not driven out by the Ryan Brunner campaign juggernaut, but by popular demand:

Since March 2013 when I announced my candidacy, public attention, concern, and outright opposition to the national educational standards movement known as Common Core, has increased exponentially. Due to the fact that I was an early and vocal skeptic of the Common Core, I have been deluged with requests to comment on this subject from all over the state. I have concluded that I cannot run an effective statewide race and at the same time be heavily involved in efforts to oppose Common Core [Rep. Jim Bolin, quoted in David Montgomery, "Bolin Abandons Public Lands Campaign," Political Smokeout, 2013.10.03].

I wondered how long it would take Rep. Bolin to come to his senses. School and Public Lands may be the most boring job on the statewide ballot. Candidates for that job don't get to talk about education, which is what really fires Bolin's passions. I can't imagine Bolin mustering nearly as much give-a-darn about managing mineral leases as he can about education and liberty and the fate of the Republic.

Rep. Bolin may also realize what a jam his fellow Common Core opponents are. They got flummoxed at a public meeting on Common Core two weeks ago, where all the press (and even one advertised opponent) went pro and Bolin sounded like the only con voice willing to wage a real fight. The Common Core opponents are outfunded and outgunned by organized education industry professionals. If opponents are going to get anywhere in jamming this latest retread of the perennially time-wasting education reform churn, they will need a strong voice in the Legislature raising heck during session with bills and during the 2014 campaign with rousing stump speeches. Rep. Bolin will have much more fun in that role.

Related: The Office of School and Public Lands is so boring—

—how boring is it?

—it's so boring that state web techies fall asleep working on its website. Seven weeks after Vern Larson's appointment as the new commissioner, most pages of the office's website still features ex-commissioner Jarrod Johnson's face. 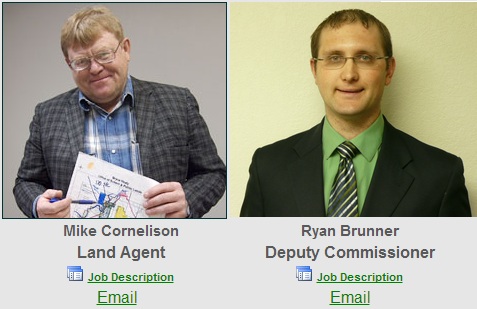 Checked on plaid! That mischievous smile! That vital map! That picture screams that he would liven up any discussion of grazing leases and WPA dam inspections. Stand him next to aspiring Deputy Brunner, and Cornelison would win a vote any day! And his name has corn in it! Cornelison for Commish!