A January 2008 business plan prepared by Agrifood Solutions International for Northern Beef Packers in Aberdeen offered this estimate of the construction costs then anticipated to put a slaughterhouse in operation by August 2012: 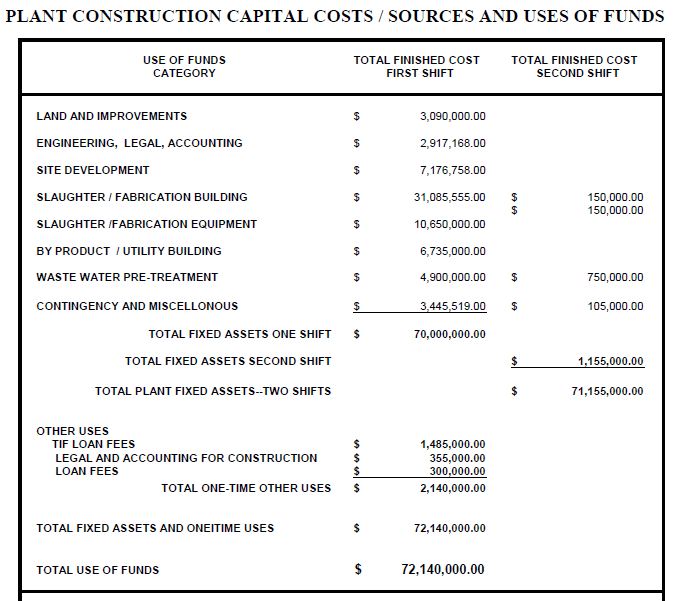 As we well know, Northern Beef Packers didn't start slaughtering cattle until October 2012. But by then it had apparently slaughtered a lot of financial sheep, burning up perhaps twice as much money as its own business plan projected to build.

But notice that line on loan fees. NBP's organizers said they'd have $300K in loan fees. They disbursed more than that, $450,000, in one fell swoop to Richard Benda for his "loan monitoring" duties.

By 2009, NBP said it would employ 702 workers. NBP held out the prospect of employing two shifts and bringing job totals to 1,352. In a 2011 economic impact study contracted by the Governor's Office of Economic Development, ASI revised those job numbers down to 561 at start-up (again prematurely projected for October 2011) and 660 by 2015. At its peak during its brief nine months of operations, NBP employed around 400 people. If I'd have been an EB-5 investor in 2007 or 2010 counting on NBP to use my $500,000 investment to create at least ten jobs to win me my green card, more accurate job projections might have swayed my decision to invest.

Who was helping sell these bogus numbers to the state and its EB-5 visa investors? Northern Beef Packers board member Larry Gabriel:

Experts who say Northern Beef Packers didn't stand a chance of fulfilling its business plan promises aren't just shooting hindsight spitballs. John Tsitrian, who brokered cattle for a decade and knows more about business in general than I, said back in 2006 that Governor Rounds was exaggerating the prospects for his beef initiative. Tsitrian says that the South Dakota Stockgrowers Association complained about the Rounds Administration's lack of consultation on the certified beef program.

Northern Beef Packers' plan, supported by a prominent former Rounds official, got its numbers badly wrong. They didn't just miss clear signals from the market; it's as if NBP and Governor Rounds didn't want to hear experts who might review their numbers and see that they didn't add up.