The Pew Research Center released a study yesterday on journalism in our state capitals. Pew finds 751 full-time statehouse reporters and 851 part-time statehouse reporters. Newspapers have retreated from the statehouses, but they still provide the largest portion of that press corps, 38%. Television stations provide 17%, just barely more than the 16% coming from non-traditional media like non-profit groups and online news outfits. 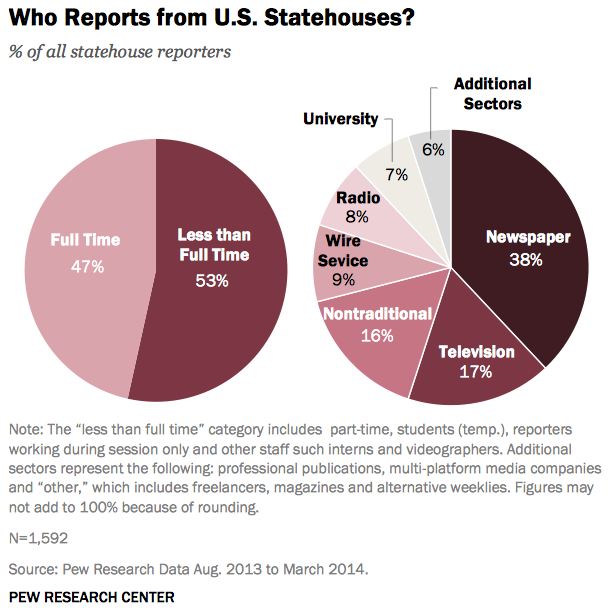 70% of all newspapers and 86% of local TV stations don't bother to assign anyone to their statehouse beats.

Radio stations make up only 8% of the statehouse press corps. Public radio stations provide almost half of that noble corps.

A straight count is perhaps unfair, since South Dakota has far fewer news consumers than most states. Texas has the most statehouse reporters, 53, but with some 26 million residents, that breaks down to one reporter for every 490,000 Texans, compared to one for every 410,000 South Dakotans. (Pause a moment. Think about that, Bob: you're the only guy on the job for over 410,00 people.)

But let's not make excuses: all four states with less population than South Dakota manage to station more reporters in their capitals.

Why does this matter? Recall the theory that geographic isolation of a capital contributes to less press coverage, which in turn facilitates more corruption. One recent study ranks South Dakota eighth for corruption. Neither North Dakota nor Wyoming appear in the top ten.

Hmm... maybe getting candidates to challenge one party rule is only one way to tackle South Dakota's corrupt regime. If we can't field candidates, maybe we need to field correspondents.