Ah, high school debate, that joyous season when ninth graders stand and deliver more public debates in one weekend than Mike Rounds will during the entire general election season.

When I judge a high school debate, I take notes called a flow. First the Affirmative team speaks and puts points on the flow to prove some point. Then the Negative team speaks to put responses on the flow. Usually, after two speeches by decent debaters, my flow looks like this: 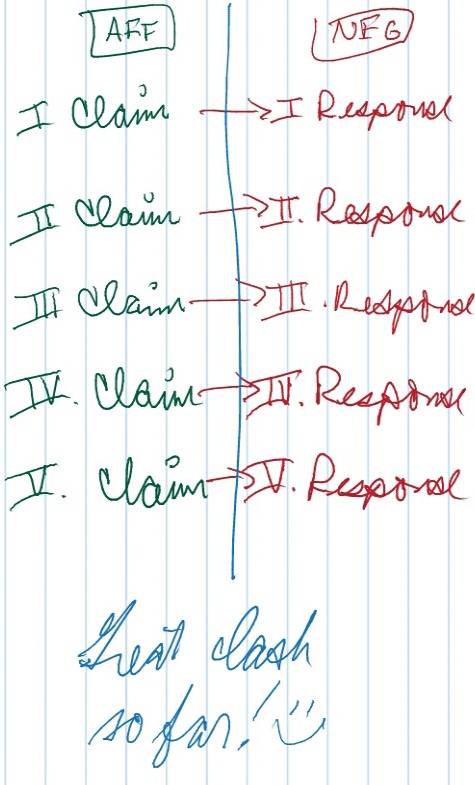 Aff lays out arguments, and Neg responds to each one, point by point. Even if Point III is bogus, Neg takes a moment to explain why Point III is bogus before moving on to IV, V, etc. (And Neg does this in eight minutes or less—smart kids!) That's good clash (and good fun!).

South Dakota Democrats are on Affirmative, arguing that Mike Rounds is corrupt and unfit for U.S. Senate. This week, Democrats put a lot of arguments on the flow. And how did Team Rounds and the SDGOP—the Negative team—respond? 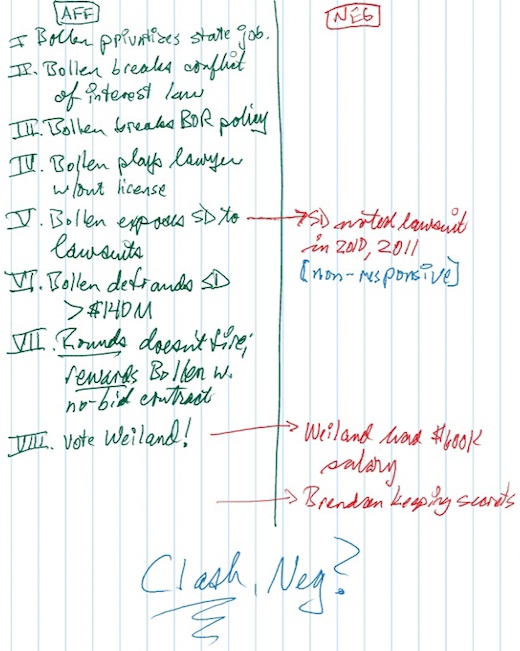 Against seven well-evidenced Aff points that show Mike Rounds rewarding the corrupt double-dealing and deceit of state employee Joop Bollen, Neg launches two ad hominem attacks at the bottom of the flow, tacks one diversionary non-response to one point, and leaves the rest of the flow blank. Mike Rounds, Dick Wadhams, and the rest of the GOP team have not challenged...

In a high school debate round, I can just glance at the flow, see all that white space in Neg's column, and know that Aff is winning the debate. The SDGOP's inability to come up with direct responses to these questions about Mike Rounds's management of economic development shows they weren't ready for this corruption to be exposed and don't know how to spin pretty black-and-white evidence that Mike Rounds should not be our next Senator.

Of course, Republicans have more than eight minutes to respond. But every day they leave the flow blank is a day when Democrats can shout "Drop! Pull!", and tell voters to draw the arrows and vote Aff. Keep piling on, Dems!