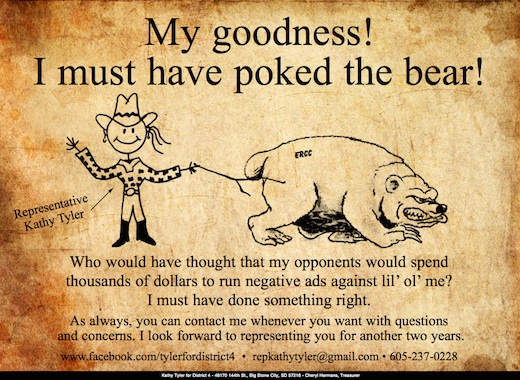 Rep. Tyler is referring to the big money a new PAC called "East River Concerned Citizens" is pouring into deceptive ads against her. The radio spots and postcards are less interested in accurately portraying her voting record on abortion (she's actually a bit conservative for my taste) and, from what I hear from sources and glean from who's contributing to ERCC, more interested in retaliating against Tyler for challenging the state's corrupt EB-5 economic development practices.

Certain big-money players have a great stake in South Dakota's endemic corruption (that's the second time this morning I've used that phrase and that link, and for good reason). Democrats like Rep. Kathy Tyler who speak the truth to that power can expect hard negative attacks to take them out. Fortunately, Rep. Tyler is not easily cowed by such attacks. Democrats, follow Kathy's lead. Poke that bear, and don't back down!