When Charlie Hoffman and I got done riding four-wheeler around the prairie (and have I mentioned how big I smile when I say that phrase?), we went inside to talk politics. And oh, did we talk. Charlie Hoffman has served…

My friend Charlie Hoffman (yes, that Charlie Hoffman) wasn't talking one-party rule in Pierre. (We'll get to that issue in another post.) He was talking about the prairie, several acres of which he currently occupies east and north of Eureka, west of Long Lake.

Charlie invited me up to his McPherson County farm last week to get the four-wheelers out and learn what the prairie is really about. I was all excited to hear a Republican legislator go all Aldo Leopold, but four-wheelers? I hadn't ridden four-wheeler since I was kid and rode three-wheeler. I figured I'd break my neck trying to keep up with hell-for-leather Charlie before I could get back to the motel to write up his prairie oasis.

Fortunately, Charlie showed less enthusiasm for the throttle than for the native grasses, the virgin soil, and the economy, geography, and archaeology of his land. 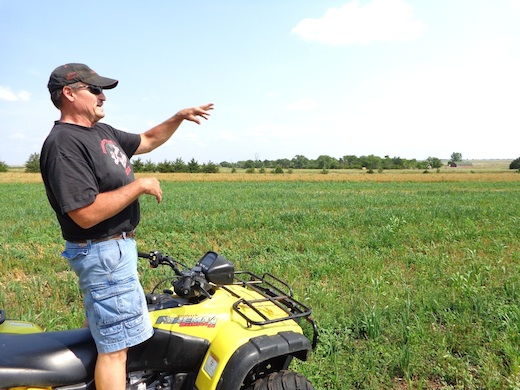 Charlie Hoffman shows the cropland he's restoring to grass. He said his dad once told him there's no money in crops; the route to coming out ahead in farming is grass and cattle.

No Term Limits on 2014 Ballot; What to Do About Slow Learners in Legislature?

South Dakota voters won't get to vote for term limits on the 2014 ballot. Well, actually, they'll have the usual opportunity to limit the terms of local incumbents like Jason Frerichs, Phil Jensen, Steve Hickey, and Fred Romkema. They just…

Rep. Rev. Steve Hickey (R-9/Sioux Falls) made waves last summer when he told his parishioners (strangely long word... what if we said parishites?) that he had changed his mind on capital punishment. The Christian conservative said in June that he…

One moment Rep. Charlie Hoffman is crazy; the next moment he talks perfect sense. Rep. Don Kopp and some of his colleagues want to give pistol packers a pass by making carrying a concealed weapon without a permit a secondary…

Sorry about the delay: the Divine Miss K needed some fairy tales of a different sort.... Oh, we were having such a nice discussion of the purported benefits and politics associated the Keystone XL pipeline. But then my suggestion to…

Some public officials shun and denigrate blogs and other social media. Some of these blog-wary officials may simply be unfamiliar with the technology; others (like, I speculate, members of the Madison Central School District board and administration) are stung by…

Rep. Charlie B. Hoffman (R-23/Eureka) provides the blog scoop of the day, declaring his support for a state pipeline tax. He still finds my anti-Keystone XL pipeline position misguided, but... On the other side of the coin we must insist…