Senator Russell Olson's (R-8/Wentworth) ascension to Majority Leader has an upside: reporters will ask him more questions, which will mean more scrutiny of his bad policies.

"Nobody goes to Pierre wanting cut to cut aid to education, but we have a duty to the taxpayers to balance the budget," Olson said. "Right now, they've given us the mandate they don't want their taxes increased for any programs" [Chet Brokaw, "South Dakota: Lawmakers Unsure Where to Cut Budget," AP via Yankton Press and Dakotan, 2011.01.05].

...for any programs? Olson appears to be constructing an electoral mandate of his own imagination. Let's see what South Dakota taxpayers say:

Decreasing education funding is viewed as enormously unpopular. Instead, likely voters believe that the state needs to invest additional resources in our state's public schools....

Now the ASBSD didn't just make these statements up. They commissioned Zogby to poll 500 likely South Dakota voters on Spetember 9--11, 2010. The results are no fluke: the report says the results roughly match those found in a comparable survey in 2008. The poll was politically representative of South Dakota voters (if not the partisanly skewed State Senate in which Olson serves), with 44% Republican, 34% Democrat, and 22% Independent.

Let's look at specific numbers from the ASBSD/Zogby poll to see how wrong Senator Olson is: 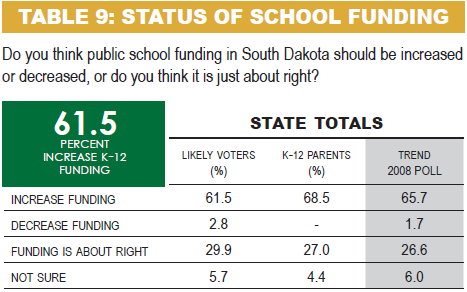 The voters Senator Olson thinks constitute a "mandate" not to raise taxes for education constitute a smaller portion of the electorate than the margin of error. Over 90% of voters say do not cut K-12 funding.

Now folks like Senator Olson who are determined to cut K-12 education funding may argue that "throwing money at education" doesn't make it better. But as Senator Olson's quote above indicates, he prefers to couch his answers in the perceived beliefs of others rather than as statements of his own position. And on the issue of funding, voters believe that throwing money at education will make it better: 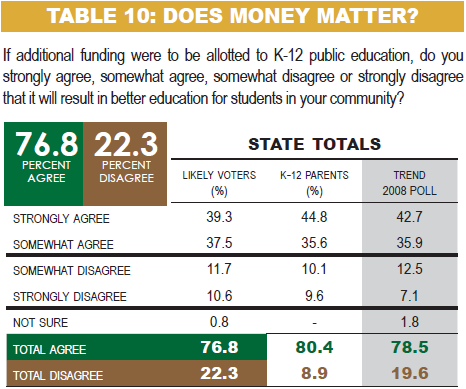 Gee, there's no arguing with the voters, is there, Senator Olson?

The poll offers voters a couple of specific solutions: a requirement that the state raise the share of the budget dedicated to K-12 education from the current 31% back to the 1998 level of 39% that Janklow Republicans thought we could afford, and a proposal to increase the state sales tax to fund K-12 education (Senator Adelstein, we have the voters on Line 1). The voters would support both measures: 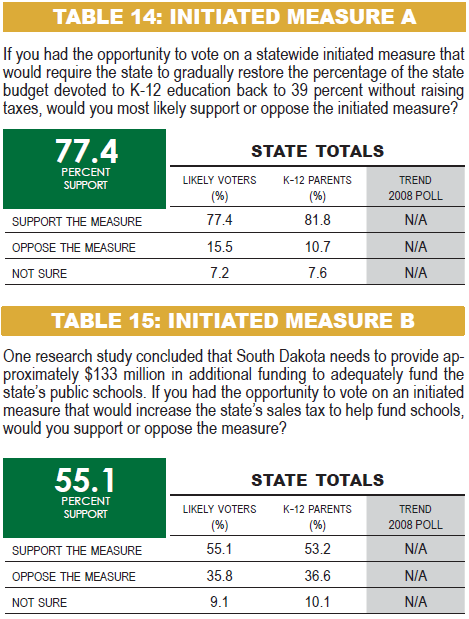 Senator Olson's words to the press indicate he is keenly concerned with aligning his votes with the will of the people. On K-12 education funding, he needs to look at the facts and acknowledge that his "mandate is the opposite of what he's proposing, and that the voters are willing to pay for it.