There are 1123 people in Madison who are not in Madison. Roll with me on this local illusion.

During last week's school board election, I noticed an odd bump in the voter registration numbers:

Now a look at the ward map (graciously provided online by our new county auditor Bobbi Janke) shows that Ward 1 actually reaches across the north side of town to include everybody north of 9th Street. That grabs Cedar Court, the trailer park, and the Williams Addition. Ward 1 also includes the Dakota State University campus, which might throw a few more registered voters into the pot. But 2000 more voters, 165% more than Ward 2?

Then my conversation with the gentleman from Wilmot got me thinking. Ward 1 also includes 110 East Center Street, the location of Dakota International Services, LLC, which offers MyDakotaAddress.com, a mailbox service for recreational vehicle owners and others who travel the country with no real permanent home.

I checked at the courthouse. According to the South Dakota voter registration records, as of yesterday, the number of registered voters listing 110 East Center Street, Madison, SD as their voting address is 1123. 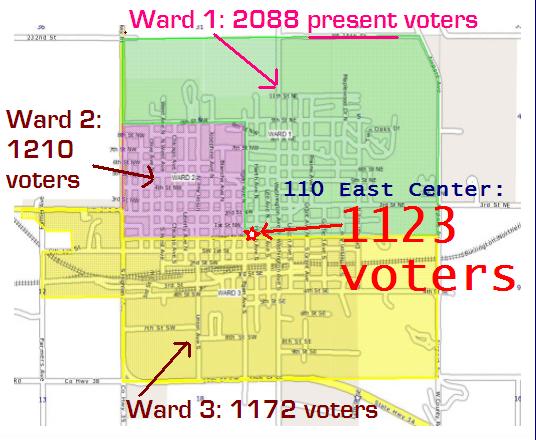 1123: that's 275 more than the number of Madison residents who showed up to vote in last week's municipal election. Not that RVers would have any interest in voting in our municipal elections. Given that the vast majority of them have no connection with Madison other than the checks they write to Dakota International Services manager Terri Lund or owner Jon Knuths, these voters likely have no interest in who serves on our school board or city commission.

These faux residents thus depress our voter turnout numbers, though not by much. The official voter turnout last week in Ward 1 was 13.4%, the lowest of the four election zones. Assume that none of our RVers cast ballots, calculate turnout solely on the basis of real residents, and you get a Ward 1 turnout of 20.5%. That's an improvement, although still below the 21.4% turnout Ward 2 posted, and still below the kind of turnout that warms the cockles of good democrats' hearts.

The school board, city commission, and county commission can't do much to affect these fake residents. Property tax and utility bills won't touch them. The county commission might affect what the RVers pay to register their vehicles, but that's about it.

What might get the RV voters' attention is state level politics. Our RV ghost residents might have an interest in voting for a legislative candidate who vows never, ever, ever to vote for a state income tax... and 1123 is just a handful more than the number of votes by which Russell Olson beat Scott Parsley for a State Senate seat in 2008. One targeted mailing to all "residents" of 110 E. Center—or just one mass e-mail from the owner to all of his customers—could swing a lot of single-issue voters to one candidate.

Whichever way (and whether) these ghost residents vote, there is an fundamental inequity in permitting them to vote in Madison elections. They essentially buy permission to vote in a town where they don't really live. The South Dakota Supreme Court has said that an individual cannot gain eligibility for public office simply by maintaining voter registration at a rented mailing address in the office's jurisdiction while living mostly somewhere else. I would assume this ruling applies to voting in the elections of that jurisdiction as well.

And if that ruling does not forbid such rental voting, then I return to a complaint I make often: why can't my dad, who rents a mailing address in Madison and pays taxes to the city on numerous purchases and in-town properties, vote in our municipal elections? I guess if we country folks want to vote in Madison city elections, we simply need to pay Jon Knuths $150 a year.