Reading Lauck, Miller, Simmons… Why Is South Dakota So Republican? 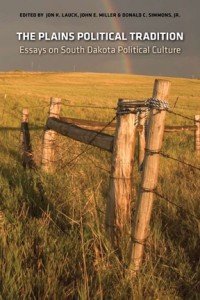 The Plains Political Tradition provides a great primer on South Dakota politics for bloggers, campaigners, and other students of our fair state's history. But be forewarned, fellow blog-babies: this book offers no polemics or controversial battles. Lauck, Miller, and Simmons assemble a panel of scholars who offer mostly rigorous, carefully documented efforts at political and historical science.

Lauck, Miller, and Simmons declare their academic intent in their introduction:

In this volume, the authors have analyzed certain episodes and trends in South Dakota political history and used them to develop a better understanding of the broader political culture of the state. This process continues the discussion launched in 2004 in the pages of the journal South Dakota History and constitutes a major step forward in the effort to build a larger synthetic framework for understanding the political dynamics—both formal party politics and policy formation and more general social attitudes—of South Dakota [Jon Lauck, John E. Miller, and Donald C. Simmons, Jr., "In Search of South Dakota's Political Culture," in PPT, p. 7].

Language like that ("synthetic framework"!) will give the knuckle-dragging insult-mongers at Dakota War College heartburn, but it signals the authors aren't just spitballing or telling tales. They're building an academic theory of South Dakota politics.

But they aren't just writing for eggheads. The blog stripes of Lauck and a couple of the chapter authors show through in the editors' hope that the book will spark conversation:

We also hope that this book is the beginning of a longer conversation. The conclusions contained herein are not the end of the matter but a substantial first step toward developing an integrated and nuanced framework for understanding the state's and the region's political culture, one that will engage scholars and commentators for decades to come [Lauck, Miller, and Simmons, p. 7].

Commentators... that's us, kids! I'll leave the scholarly responses to the professors and the journals. Let's talk about what The Plains Political Tradition as a whole tells us amateurs (from the French, for lovers) of South Dakota politics about two big questions:

First, PPT makes clear that Republican dominance does not mean that there are no Democrats in South Dakota. Far from it: Dr. Miller traces the "40% rule" (p. 79) back to territorial times. From our earliest days, we Democrats have regularly been able to muster 40% of the vote. Unfortunately, it takes unusual circumstances like the Great Depression and unusual leaders like George McGovern and Richard Kneip to move that 40% higher.

But why won't that number move? It could have to do with the "cultural matrix" (Lauck, p. 16) in which South Dakota was founded. We established our rural state just as the frontier was closing and the nation was urbanizing. The growing prevalence of urban life could easily inspire fears among early South Dakotans that our rural way of life could be overshadowed. The Republican party disliked cities even then (see? even Sarah Palin's "real America" talk is recycled from over a century ago; see Lauck, p. 23), so its message would resonate all the more in a new rural state hoping to assert itself at the D.C. table alongside older urban states.

Dr. Miller notes that Democrats in Washington held up South Dakota statehood for many years (p. 78). Such obstruction perhaps wrote distaste for Democrats into South Dakota's DNA. But don't confuse cause and effect: D.C. Democrats blocked South Dakota statehood because we already were a heavily Republican territory. Many of our territorial settlers were Union Army veterans loyal to the party of Lincoln. We also caught the wave of GOP-leaning Protestant immigrants from Germany and Scandinavia (Miller, pp. 78-79).

South Dakotan Republicans have held their dominance in part because they have not often been challenged by a very distinct Democratic opposition. The first Democrats to appear in the state were actually a bunch of disaffected Republicans (Miller, p. 79). The Democrats who rode FDR's coattails and the upheaval of the Depression to power in 1932 quickly lost that power in 1936 in part because they took such conservative positions that they did not offer a clear alternative to the Republican Party (Miller, p. 87). Then candidate Karl E. Mundt, playing Red Scare, dealt South Dakota's left-wing a defeat in 1938 from which it has struggled to recover (William Pratt, p. 121).

Migration both in and out of the state may also contribute the GOP's continued dominance in South Dakota. South Dakota has not experienced a major influx of foreign migrants since the 1870-1910 phase (Frank Van Nuys, p. 64). Large waves of immigration bring the possibility of changing local political dynamics; such waves have not come to disrupt the early established patterns that favor Republicans. Meanwhile, we have experienced out-migration of young talent of large enough magnitude to be named "the Dakota effect" (Joel Johnson, p. 180). Channeling their pioneer forebears, young people with talent, gumption, and a desire to improve themselves often head out of South Dakota to make their fortunes (and often do quite well). Perhaps that desire to improve themselves also correlates with a desire to improve their community. Tie that reformist urge with Grandpa's desire to wander beyond the horizon to start a new life, and South Dakota is perhaps left with a higher proportion of young people who are happy with the way things are... classic conservatives.

How might Democrats reverse over a century of Republican dominance? The authors in PPT regularly refer to the victories and defeats of two major exceptions to GOP dominance in South Dakota, the Depression surge of Democrats and the Democratic rejuvenation led by George McGovern. In both cases, Democrats played to agrarian and populist concerns. The success of grassroots South Dakota environmental movements in the 1970s suggest the need to unite even more political strands, including anti-corporate sentiment, localist federalism, and sovereignty (John Husmann, p. 241-2). Building coalitions among those interests may be complicated, but it's one route to power, or at least success in specific campaigns on specific issues like the Oahe Irrigation Project or, currently, the Keystone XL pipeline.

But Democrats may learn as much from failures as from successes. In his survey of major Senate defeats, Dr. Jon Schaff finds that seniority and party leadership don't sell with South Dakotans, whatever the party of the incumbent (pp. 319, 324, 326). Instead of emphasizing their pull in Washington, South Dakota politicians need to make clear their continued connection to the home folks.

The 1936 and 1938 defeats seem even more instructive for Democrats looking to rebuild a winning opposition in South Dakota. In 1936, South Dakota Democrats tacked conservative, while Dems in surrounding states tackled economic problems and built more liberal coalitions (Miller, p. 87). Democrats in those others states rode the realigning wave led by FDR; South Dakota Democrats fell from power in 1936, then got hammered by red-baiting Mundt in 1938. Instead of letting shouts of "Liberal! Radical! Socialist!" drive them to declare themselves just as conservative as the Republicans on the ballot, Democrats should stand up for themselves and their party. Embrace the issues that distinguish us from the GOP. Give voters a real choice.

We may also want to caution current and future Dems from trying too hard to replicate the oft-cited McGovern appeals to agrarian and anti-corporate sentiment. South Dakota's majority rural population is just a bit below its 1980 level, while our urban population has increased by over 50%. A smaller percentage of South Dakotans make their living from the land. More South Dakotans receive their wages from large corporations like CitiBank, Premier, and Sanford Health. We South Dakotans still carry around the image of the "real South Dakotan" as wearing a checked shirt and riding a horse or a tractor, but hundreds of thousands of real South Dakotans live in town, work in offices, and cash monthly checks from The Corporate Man. Democrats must not discount over a century of deeply seated cultural identity, but perhaps we can boost our traditional 40% by appealing to the increasing number of South Dakotans for whom agrarian values simply aren't a part of daily life.

Such are the things The Plains Political Tradition can get us thinking about. Lauck, Miller, and Simmons's compilation illustrates numerous factors that have shaped South Dakota politics. The craftier devils among us—if they don't all move to the Cities—may well find in PPT some clues for changing those politics.