The Center for Public Integrity conducted an 18-month investigation of transparency and accountability in all fifty state governments. How'd South Dakota do? Not well: 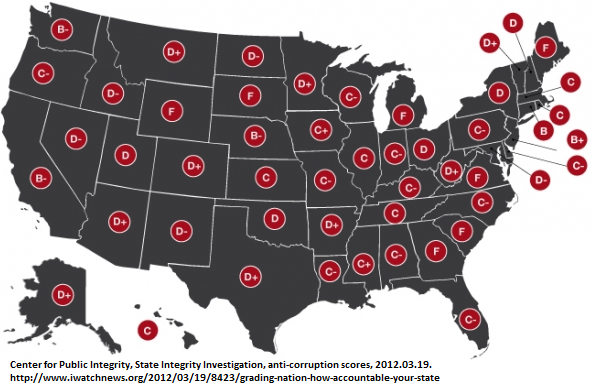 We got an F, as did seven other states. With our 50% score, we did worse than everybody else but Georgia (49%). What gives?

Many of the states at the bottom of the rankings, meanwhile, are sparsely-populated Western or Plains states like Idaho (40th), Wyoming (48th) and the Dakotas (North Dakota is number 43 and South Dakota comes in at 49). There, libertarianism roots, a small-town, neighborly approach to government and the honest belief that 'everybody knows everybody" has overridden any perceived need for strong protections in law.

Peggy Kerns, director of the Center for Ethics in Government at the National Conference of State Legislatures, noted that ethics laws are shaped by the environment and culture of the state. "In smaller states, the culture is different," she said. "It is harder to disobey the law and go against your own moral core if everyone knows you" [Caitlyn Ginley, "Grading the Nation: How Accountable Is Your State?" Center for Public Integrity, 2012.03.19].

Ah, so it's not that we've got lots of corruption; it's that we're so confident that we don't have corruption that we haven't our faith-based henhouse leaves the door open for serious foxes. States that have dealt with more foxes have better chicken wire: New Jersey gets the highest score, a B+ at 87%, while Illinois, often reviled for "Chicago-style politics," ranks tenth with a C at 74%.

The Center for Public Integrity engaged local reporters in each state to gather data on their state governments. South Dakota's observer was blogger emerita Denise Ross. Here's how her data broke down by category:

In her write-up of our scores, Ross notes Democrat frustration with Republican domination of the redistricting process, but she gives the state good marks for increasing transparency in that process. We also get a B for internal auditing. On everything else on the scorecard, we stink. Some of the major stinkers:

Ross includes comment on the ethics commission from the Governor's chief of staff Dusty Johnson, who says our current policies and our "free and robust press" sufficiently check corruption. Ross also notes that Secretary Gant is making some improvements with online campaign finance information.

Still, that F doesn't look good. Even if we all trust each other, we need strong ethics laws and crystal-clear government transparency to protect our public dollars and institutions from inevitable abuses.