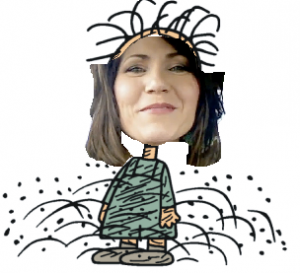 One of the few legislative "achievements" Rep. Kristi Noem can talk about on the campaign trail is passage of HR 1633, the Farm Dust Regulation Prevention Act. (HR 1633 passed the House 268–150 last December, then disappeared.) She got her campaign talking-point crusade against imaginary EPA regulations through the House by saying that rural dust is perfectly natural and poses no significant threat to anyone's health...

...unless of course, you're driving I-35 through Oklahoma:

A massive dust storm swirling reddish-brown clouds over northern Oklahoma triggered a multi-vehicle accident along a major interstate Thursday, forcing police to shut down the heavily traveled roadway amid near blackout conditions.

...The area has suffered through an extended drought and many farmers had recently loosened the soil while preparing for the winter wheat season [Justin Juozapavicius, "Oklahoma Dust Storm Shuts Down Portion of Interstate 35," Huffington Post, October 18, 2012].

But hey! Preventing regulation that was not going to happen in the first place is a lot more important than preventing dust storms that send people into the ditch, right, Kristi?