The Environmental Working Group has new farm subsidy data up for 2012. The Washington Post summarizes the data with this fun map and a list of the top Congress critters enjoying their slurps at the subsidy trough: 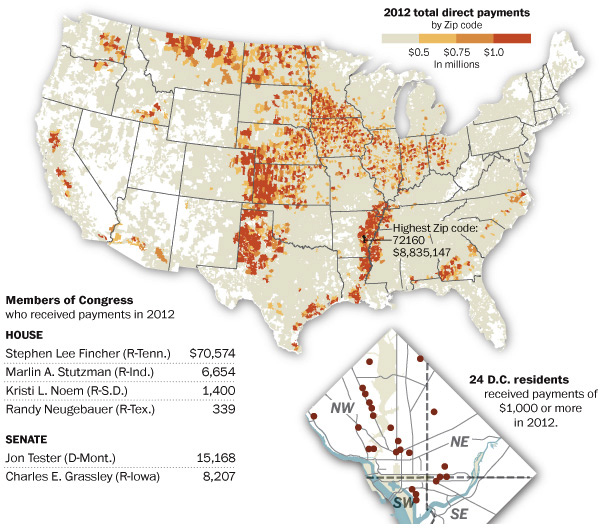 Interesting to map those bands of farm subsidy payments... and to see almost none of those welfare payments in the liberal Northeast.

Rep. Kristi Noem has significantly cut her farm subsidy take. After enjoying a $481K share of her family corporation's over $3 million in farm welfare payments from 1995 to 2011, South Dakota's lone Congresswoman took just $1,400 in direct payments last year, similar to the amounts she received in 2010 and 2011.

Noem cashed out her share of her family's Racota Valley Ranch in 2008. Her mom and brothers-in-law took one more big swig of corporate last year, drawing $232,707 in handouts ($164K for disaster, $62K for crops, $6K for conservation) before dissolving the corporation at the end of 2012. Way to finish big, Arnolds!