Bosworth in Washington Looking for Koch Brothers’ Stamp of Approval

KELO deems newsworthy the hubby-fanned rumors of Dr. Annette Bosworth's pending declaration of candidacy for the GOP nomination for South Dakota's open Senate seat in 2014. They also deem newsworthy the very public photos Bosworth and her husband Chad Haber are posting of themselves in Washington D.C. on a trip that began within 24 hours of their Web publicity campaign.

But the real newsworthy question is this: what is she doing in D.C.? Dr. Bosworth offers an update with this photo: 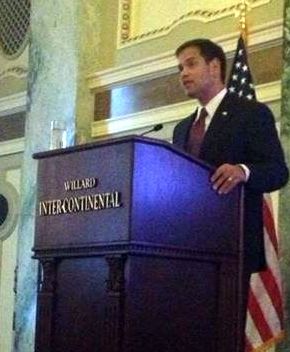 That's not Che Guevara; I'm pretty sure that's Senator Marco Rubio from Florida, speaking at the Willard Intercontinental Hotel. If this picture is who and where it appears to be,* then Annette Bosworth is at the Legacy Political Fund's Family Retreat and Policy Briefing. Legacy Political Fund is associated with Legacy, a group of free-enterprise evangelicals (there must be an oxymoron in there) who fancy themselves GOP kingmakers.

Power-oriented evangelicals. Paul Ryan. Koch Brothers. Don't be dumb: Annette Bosworth is Christopher Columbus: she's in Washington looking for God, gold, and glory... emphasis on the gold, because she ain't got none!... at least none that could fill a Senate campaign war chest.

But that's what it looks like Annette Bosworth is doing in Washington tonight, praying for the Koch Brothers and other corporate fascists to write her a check to challenge Mike Rounds in the GOP primary.

That's the news. Now for the wild speculation for which you've come to depend on the South Dakota Blogosphere:

Go to OpenSecrets.org. Look up the Legacy Political Fund's big donors. Their big South Dakota donor over the last couple years has been Steven T. Kirby of Sioux Falls. Steven T. Kirby has hinted he might run for the U.S. Senate. But Steve Kirby has also put big money into Kristi Noem and her PAC (which he treasures).

So here's what's happening under the radar: Steve Kirby wants revenge on Mike Rounds, but he doesn't want to run for Senate himself. Why would he, when he knows Rounds can beat him, and when he can probably stay at his Bluestem Capital and make truckloads of money without anyone harassing him? He can get the same revenge by spending his money à la Citizens United. He just needs a pretty face to put in front of his super-PAC narrative.

He looks at Kristi Noem. He looks at her 2010 narrative: nice-looking lady enters against apparent party frontrunner, makes nice speeches and ads, wins the race. She's empty enough of ideology, that she can take orders from the folks holding the purse strings. Perfect. He looks at Annette Bosworth, smart but unversed in any policy issue beyond health care (at least as far as I can tell, but wait 'til she comes home from Legacy with her talking points on the budget and freedom and Big Gulps). She'd sound like an outsider, a non-career politician, which would give her a little edge against Mike Rounds. She'd be able to campaign as sort of an independent... but she'd need a lot of help, and she'd be beholden to those who'd provide that help.

Boom: Bosworth for U.S. Senate, brought to you by Steve Kirby and unfriends of Mike Rounds. Get me a screenwriter!

Update 2013.06.07 21:03 MDT: Chad Haber confirms via Facebook that he and his budding candidate wife are at the Legacy Political Fund event.