Annette Bosworth is again mingling her non-profit activities and her political campaign. While packing for her medical mission trip to the Philippines, the Republican U.S. Senate candidate apparently bought another phone that she never answers to set up a text update system. Over the last three days, Bosworth plastered her official campaign Facebook page with updates urging followers to text that number to receive updates on her political, medical, and religious activities: 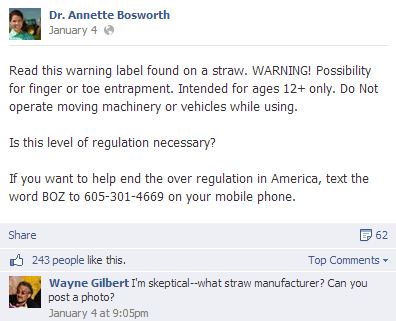 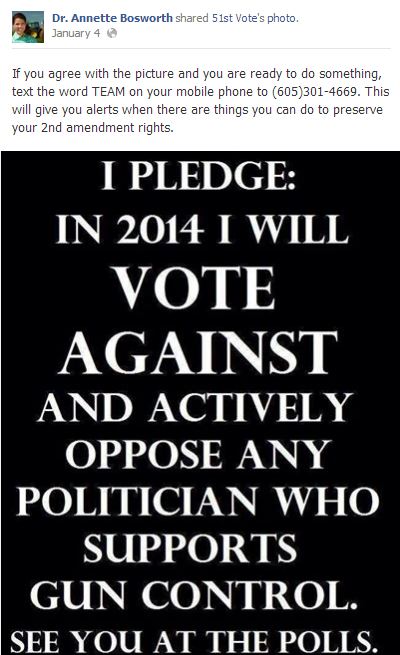 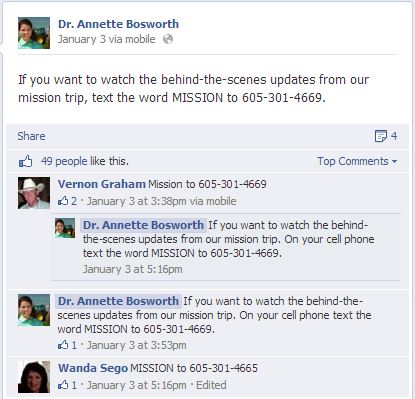 The first two are obviously political. Texting "BOZ" to 605-301-4669 elicits a response with Bosworth's official campaign URL, bosworthforsenate.com, and a reminder that one can unsubscribe by texting "STOP BOZ" (funny, I've blogging that very thing since June). Texting "TEAM" gets a message welcoming one to the "Bosworth Team" and offering a URL where one can tie a name and e-mail address to one's phone number.

The latter two are not in themselves political, but texting "MISSION" or "DAILY" draws the same response as "TEAM". I have not received further updates or instructions telling me just what it means to be part of the Bosworth Team, but since these update offers are on her political page, these are all political activities, right?

Using a cell phone to gather contact information for campaign pitches is fine. But using the same number to conduct political, religious, and non-profit charity activity is problematic, if not illegal. If Bosworth purchased this phone number and set up this automated text update service with campaign funds, then either she is wasting campaign dollars on non-campaign activities, or her daily prayer videos and her trip to the Philippines are political activities (in which case Joel Arends is once again using his non-partisan action group for partisan ends). If Bosworth purchased this phone with non-campaign funds, she needs to declare that expenditure as a contribution to her campaign. And if she used funds from her non-profit Preventive Health Strategies, she is once again endangering her own 501(c)(3) status.

Bosworth is so bad at keeping her business, non-profit, and political activities separate that I wouldn't be surprised if she slaps "Vote Bosworth" stickers on the boxes of medicine she's distributing in the Philippines. Metaphorically, she's doing exactly that for the consumption of her American viewers.

You'd think that, with Joel Arends as her attorney, Bosworth would know better. But apparently Arends is teaching her the key lesson in South Dakota Republican politics: you can do whatever you want, as long as it serves the interests of the Republican Party machine.

Bonus Baloney: Team Bosworth spent the holidays launching an astroturf Facebook page, "McCook County for Dr. Bosworth-U.S. Senate." I guess they must think they are a super PAC, since they don't tell us who they really are. I wonder if they'll file a separate campaign finance report....