In December, I speculated that Richard Benda and Joop Bollen had their eyes on Hyperion's proposed refinery in Elk Point as one of South Dakota's next great EB-5 visa investment projects. A document from the Governor's Office of Economic Development shows that I wasn't just speculating.

In January 2008, the South Dakota International Business Institute asked the U.S. Customs and Immigration Service to amend the state's regional center status to include projects beyond dairy operations into a variety of fields, including petroleum and coal products manufacturing. The request included this statement referring to Hyperion:

The amendment request packet includes an attachment that makes the Hyperion–EB-5 connection explicit: 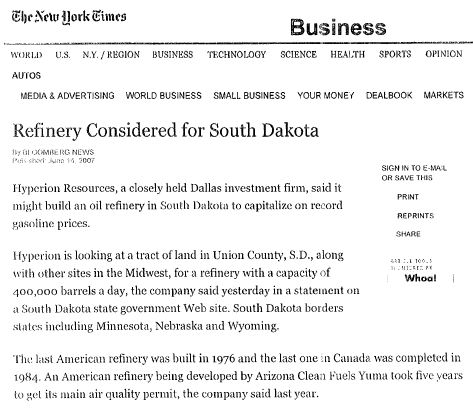