When South Dakota began dabbling in the EB-5 visa investor program in 2004, the U.S. Customs and Immigration Service assigned the authority to administer that program to the South Dakota International Business Institute, a subentity of the Board of Regents operating on the campus of Northern State University. But by 2013, the program was run by SDRC, Inc., a private company created by SDIBI director Joop Bollen in 2008. How'd that change happen, and was it legal?

Among the great piles of documents the Legislature's Government Operations and Audit Committee will begin reading in their opening EB-5/GOED hearing on Friday is a Memorandum of Understanding (MOU), dated Janaury 15, 2008. I present images of that MOU's five pages here: 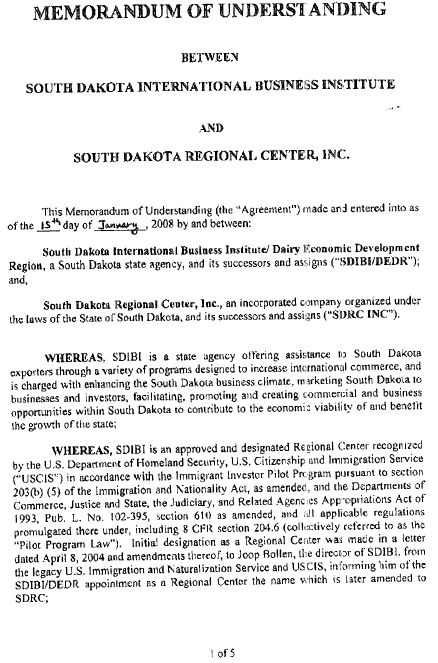 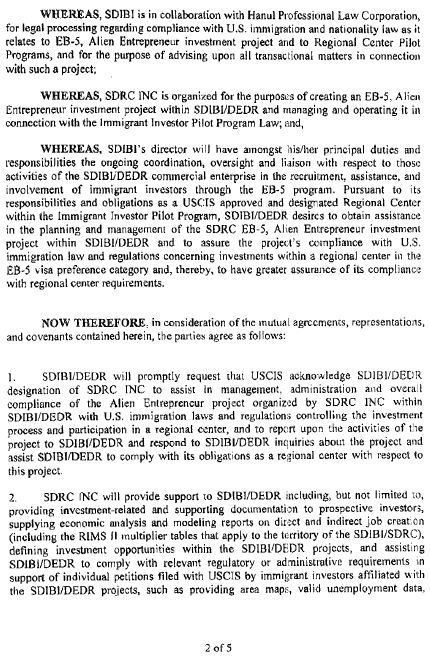 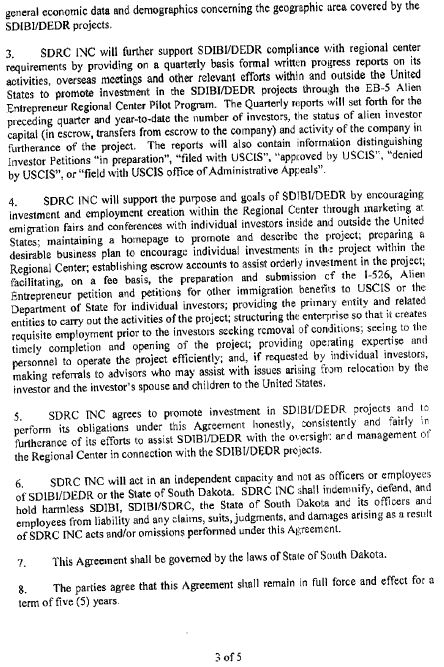 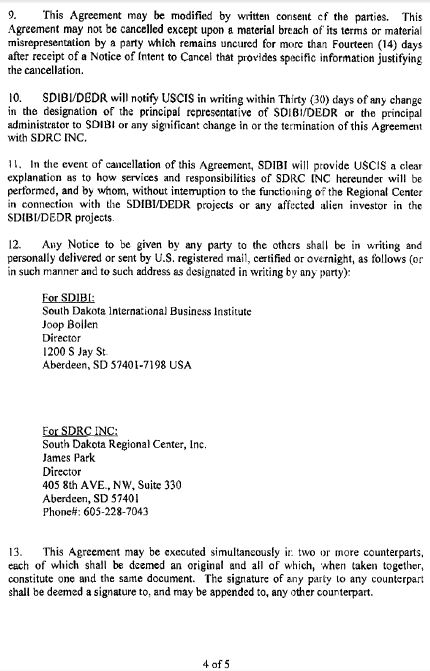 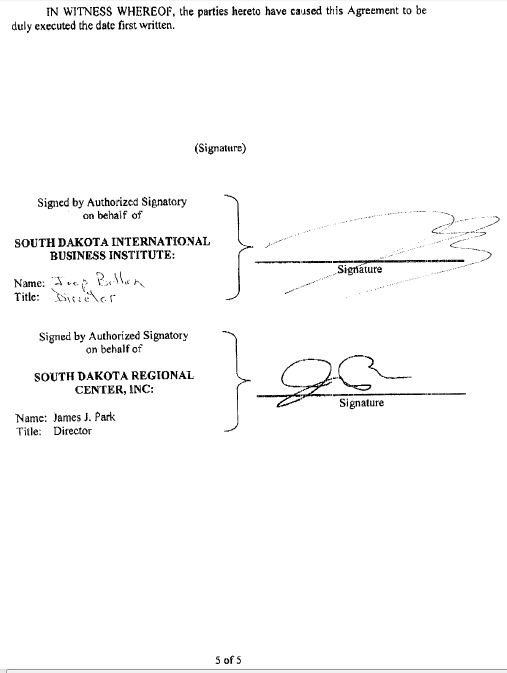 This Memorandum of Understanding is a creative legal fiction in which Joop Bollen talks to himself. The MOU shows James Park, lawyer for the Hanul Professional Law Corporation of California and South Korea, signing as the director of SDRC Inc. However, the only person mentioned on SDRC Inc.'s articles of incorporation on January 10, 2008, and on SDRC Inc.'s December 30, 2008, annual report is Joop Bollen. Park was made the registered agent of SDRC Inc on April 7, 2009, but a June 2009 corporate amendment names Bollen as the only director. Park's name appears on no subsequent SDRC Inc. corporate document in the Secretary of State's public corporate database.

Park did collaborate with Bollen in recruiting and processing EB-5 investors for South Dakota. But having Park sign this MOU appears to be a convenient way to make Bollen's shell corporation look, in the USCIS's eyes, like a separate entity. And as we've seen, creating SDRC Inc. gave Bollen cover from legal liabilities incurred by the SDIBI.

But if courts can buy the argument that pieces of paper like this memorandum can make Joop Bollen into two separate legal persons who are not responsible for each other's actions, then let's look closely at the language of this piece of paper. The memorandum reminds us that SDIBI was an approved and designated EB-5 Regional Center. As far as I've seen, SDIBI is the only South Dakota entity ever so recognized by Customs and Immigration and Homeland Security. The MOU says the SDRC Inc. was "organized for the purpose of creating an EB-5 Alien Entrepreneur Investment Project within SDIBI" [emphasis here and subsequently mine]. The MOU says SDIBI's director will have amongst his/her principal duties and responsibilities the ongoing coordination, oversight and liaison" for EB-5 recruitment. The MOU says SDRC Inc. will provide "assistance" to the EB-5 project "within" SDIBI.

This language suggests that SDRC Inc. was to operate as a subsidiary of SDIBI. Paragraph 6 does declare that SDRC Inc. "will act in an independent capacity and not as officers or employees of SDIBI/DEDR or the State of South Dakota," language intended to shield Bollen and the state from scrutiny and liability. But the overall language of the MOU makes clear that SDRC can engage in EB-5 activities not by dint of its own designation as a Regional Center but only in its subsidiary relationship to the Regional Center of record, SDIBI.

Here's the problem: SDRC Inc. continued to do EB-5 business under the Rounds and Daugaard Administrations even after SDIBI ceased to exist. Joop Bollen quit his job as SDIBI director on December 21, 2009. He took nearly all of SDIBI's EB-5 records. The next day, the Department of Tourism and State Development contracted directly with SDRC Inc. to conduct EB-5 activities for the state. In that contract, signed by Bollen (not Park) and DTSD Secretary Richard Benda (there he is!), the Department erroneously claimed unto itself the Regional Center designation that USCIS issued specifically and solely to SDIBI.

And in 2010, the Board of Regents axed the SDIBI director from its budget, ending the functional existence of SDIBI and leaving no one in South Dakota authorized by USCIS to do EB-5.

It thus appears that SDRC Inc. engaged in EB-5 activities without legal authorization. The contract under which SDRC Inc. operated from December 22, 2009, to September 19, 2013, came from a state agency that did not have the authority to grant it.