Chad Haber Takes $200K Loan, Argues He Never Has to Pay It Back

I have raised questions before about the strange real estate dealings that Chad Haber, president of Sioux Falls non-profit Preventive Health Strategies, appears to have engaged in while living in Utah. Court documents illustrate another aspect of Haber's real estate dealings, which appear to be built on false promises and legal evasion. 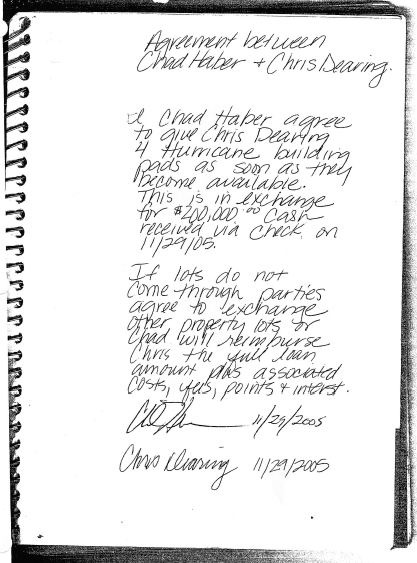 If lots do not
come through parties
agree to exchange
other property lots or
Chad will reimburse
Chris the full loan
amount plus associated
costs, fees, points & interest.

Even without knowing the Haber story, I hope every one of us looks at this spiral notebook sheet, looks at the dollar figure, and says, Noooooooo! Chris! Don't do it!

Chris did it, taking out a loan from Zions First National Bank in Salt Lake City to hand this cash to Haber. A year and a half later, Dearing had neither her money nor her four promised building pads in Hurricane (Utah, I gather from subsequent court documents, although there is a remarkable coincidence here: the 100X mortgage-flipping scheme that sent five people associated with Haber to federal prison dealt with property in Hurricane, West Virginia). Dearing sued Haber in June 2007 for her $200,000, plus interest. Dearing produced her written contract, plus a check Haber had written to Zions Bank for the amount of $2,225.37. Dearing contended this check was an acknowledgment by Haber that he owed Dearing fees and interest on her money based on the terms of the promissory note she'd taken out to get that money.

Haber and his wife, current illegitimate U.S. Senate candidate Annette Bosworth, appear to have left Utah sometime in 2007 (and have you noticed that Bosworth says nothing about her time in Utah in her campaign bio or the years she spent practicing medicine there on her LinkedIn page?). Haber responded from South Dakota to Dearing's suit in August 2007. He admitted he took Dearing's money. He did not dispute that he had signed the handwritten agreement. But he said that he and Dearing had never agreed on a timeframe or on a specific interest rate or other fees for the use of the money. His lawyer proceeded to argue that the written contract that Haber had signed was unenforceable.

Dearing's lawyers responded that Haber's position was poppycock... but it appears (and I'm still trying to find the end of the legal trail) that the cost and complications of pursuing the case against Haber, who had fled Utah for South Dakota, deterred Dearing from pressing the case further.

But it would appear that Chad Haber, managed to make off with $200,000 of someone else's money in 2005 and declared himself entirely unobligated to satisfy the conditions under which the owner of that money thought she had loaned it.