Bosworth Admits Breaking Law on Petitions, But Jackley and I Hate Women 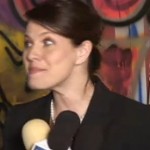 Let's begin with the pretense that I'm not evil.

On June 4, Attorney General Marty Jackley will feel free to indict fifth-place primary finisher Annette Bosworth on perjury and any other crimes that have come to his attention. In Bosworth's attempt to exploit the press furor over the Isla Vista shootings, the fake U.S. Senate candidate signaled the two prongs of her legal defense.

First, Bosworth apparently plans to say that Attorney General Jackley and reporter David Montgomery (yes, she attacks him from the mic, around 14:15) and anyone else who questions her are all misogynists. Bosworth has apparently been paying attention to Kathy Scott, the former Corinna Robinson campaign volunteer who blames me and my misogyny for her sloppy work.

For the record, the majority of sources who have helped me tell the story of the crime and corruption of Annette Bosworth and her husband Chad Haber are women. The two people taking Bosworth to court right now for unpaid wages are women. The person who told the press that Bosworth forced her family onto food stamps by not paying wages is a woman. In the Channette world where everything is a scam and everyone is out to get someone, it is more likely that AG Jackley and I are simply the weak-willed dupes of some persuasive Amazons out to destroy a fellow warrior princess.

But this isn't the Channette world. Annette Bosworth is simply full of cowcrap. (I wouldn't want to say bullcrap, because that's probably patriarchal.)

Amidst great dancing to avoid answering direct questions from multiple reporters, Bosworth said sure, she was in the Philippines when the voters in question, including her sister, signed her petition back here in South Dakota. She says sure, she signed the circulator's oath "at the end of the campaign." She says her signature on the circulator's oath certified that she recognized her sister's signature. She says... well, see what she says in this exchange with reporter David Montgomery:

Bosworth: Did I know the people that signed the petition? Yes. Are they South Dakotans? Yes. Do they support me? Yes.

Montgomery: But you didn't directly circulate that petition?

Bosworth: Let's take the one of my sister, which sat there in my office. And she signed it. And I affirmed, thank you for signing my petition, that it was dated the night before they were due, that I signed that [Annette Bosworth press conference, Sioux Falls, SD, 2014.05.27, timestamp 10:27].

Actually, as I review the petition sheets in question, I find that Annette signed one of them the night before they were due, March 24, but the circulator's oaths on the other sheets in question were signed on January 20, February 11, and March 25. In other words, Annette can't even keep her cowcrap straight, let alone the truth.

But more to the point is that, just as Annette isn't answering the reporters' questions, she answering the question of law. What does a circulator's oath affirm?

I, under oath, state that I circulated the above petition, that each signer personally signed this petition in my presence, and that either the signer or I added the printed name, the residence address of the signer, the date of signing, and the county of voter registration [emphasis mine; SDAR 05:02:08:00.03].

The filthy words in front of which Bosworth posed today have nothing to do with the wording of the law. The law is clear. Bosworth and Haber broke the law. No manipulation of language or martyrish shouting of misogyny! will change that fact or stop the court from declaring them guilty... assuming AG Jackley gets around to bringing them to court.

Watch the full presser below, if you can bear it. The best part is the first 90 seconds, where we can't hear anything Bosworth is saying.