Meade County Commissioners have what seems like a good transportation idea: they'd like to build a bypass east of Sturgis to connect state Highways 34 and 79 straight south to Interstate 90:

This east bypass would run from the Elkview Campground near Exit 37 straight north to the Buffalo Chip entrance. The project would cut a couple miles of new road from the south end of 131st Avenue to the north end of Cardinal Place. Both of those roads appear to be gravel (I invite updates from local travelers!), so I assume the project would also include paving those existing roads.

The new road would nicely entriangle Sturgis. Folks coming from Rapid City to visit the Chip and Bear Butte would not have to drive through downtown Sturgis traffic, which on normal days may cut just a few miles and minutes from the trip but which during the Rally could shorten through-time by at least half an hour. Commissioners also say that the Fort Meade VA Hospital needs this road as a second emergency access route.

The Meade County Commission hasn't poured asphalt yet, but they are taking names: Pleasant Valley Parkway, Fort Meade Expressway, Ronald Reagan Road, Todd Beamer Road, Oren Hindman Road.... Residents will get to vote online over the Christmas break, and the commission will adopt the new name at its January 14th meeting.

But the commissioners may not get to build their road, due to their choice of funding mechanism: tax increment financing. To bring in the two million dollars needed to build this bypass, the Meade County Commission has drawn up a gargantuan serpentine TIF district:  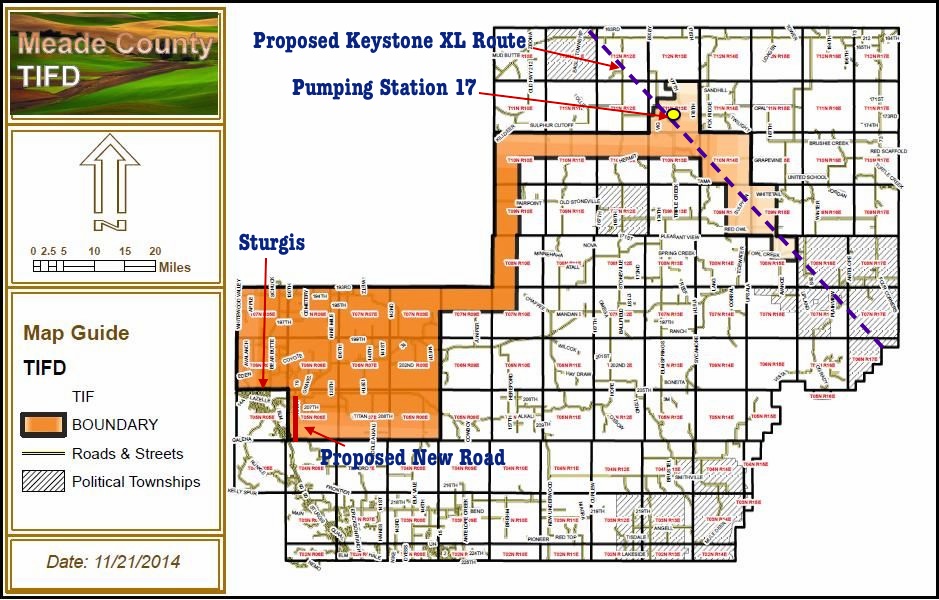 TIF districts usually are neighborhood scale. TIF districts usually encompass the immediate area where improvements will be built. Build new streets or sewer or other public improvements, and property values on adjoining lots should rise, as developers build homes and businesses to take advantage of the new infrastructure. Those increased property values provide the tax increment that pays off the financing that built the improvements.

The proposed bypass would lie in one township at the southwest corner of the TIF district. The TIF district paying for it spans 24 townships (total land area over 600 square miles), including 11 entire townships to the immediate north and east of Sturgis. East of those townships, the TIF district abandons Highway 34 and bends north, east, and back southeast to take in land on the proposed route of the Keystone XL pipeline.

That northernmost jut is the real moneymaker: it appears to encompass KXL pumping station #17 near Opal (according to the map TransCanada submitted to the PUC). Commission Chairman Alan Aker says the TIF District captures enough taxable land value to pay off the road project in 20 years even if Keystone XL does not come to fruition, but the pipeline and especially Pumping Station #17 would help Meade County pay off the TIF much faster.

The TIF would prevent the Meade County School District from cashing in right away on any added tax value from the pipeline, the pumping station or other development in the expansive district. Locking that future value into the new connector road could deprive the school district of $1.6 million over the next five years. The Meade County school board doesn't like that idea:

Superintendent Don Kirkegaard says the board is not opposed to the road, nor to TIF’s in general, but this particular TIF seems nothing more than a shift in taxes.

“I did a five-year estimate and I believe the district would lose about $1.6-million in future revenue based on projections. It really is a 2-mile road and we’re shifting the taxing structure for over 300 sections of land to pay for the road. It seems like the school is the only player in the new revenue source and the district just can’t support this particular map.”

Kirkeggard says typically, a TIF is designed to be a small area of property to help with the infrastructure in that small area. But in this one, he says it’s more of a “rob Peter to pay Paul” situation.

“The rezoning of the how we are going to use those taxes has nothing to do with the project. It’s just a way, as I say, “rob Peter to pay Paul,” and in this case, we’re Peter. So, we can’t support this particular map. It has both short term and long term impacts to the district. We’re strapped for cash, just like the county is, and we don’t think this is equitable for the school district” [Gary Matthews, "Meade 46-1 School Board Opposes County's New 131st Avenue TIF Map," KBHB Radio, 2014.12.10].

The Meade County Commission doesn't appreciate the school board's resistance. They may face broader public opposition. Under the banner of Meade County Taxpayers for Responsible Government, TIF opponents are petitioning to subject the county's funding plan to a public vote. They have until early January (January 7, by my calculation) to gather at least 762 signatures.