The new Build Dakota vo-tech scholarship that Governor Dennis Daugaard and usury-billionaire T. Denny Sanford want to create is based on the argument that not enough South Dakota youngsters are going to vo-tech schools. The scholarship further assumes that if we wave money at students, they'll go to vo-tech and work in South Dakota for three years.

But if dollar signs are the deciders, young people will say no thank you to those two-year degrees and stick with college. Let's look at two charts from a Pew Research February 2014 report titled The Rising Cost of Not Going to College.

First, consider how young workers' median income by education level has changed over the last 50 years: 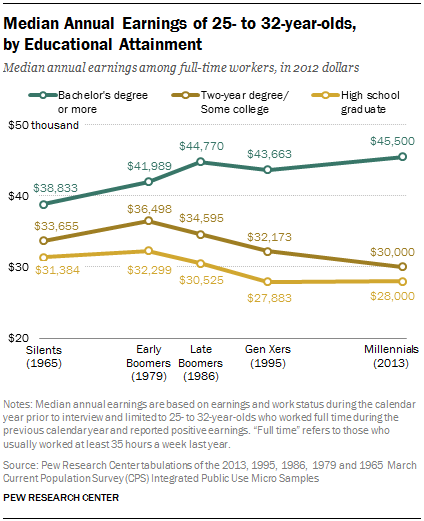 The $15,500 gap between median incomes for college grads and two-year/non-grads is more than the $15,000 value I assumed for the Build Dakota Scholarship in my state-vs-state payoff calculations. It's more than the $9K–$12K range for one-year degrees but less than the $16K–$20K range for two-year degrees provided by the state. That $15.5K gap every year is enough to allow a student who chooses college instead of vo-tech to pay off the average South Dakota student's debt in two years.

Contrary to Governor Daugaard's constant warnings of the unemployability of four-year degree holders, college grads still have an edge in landing jobs: 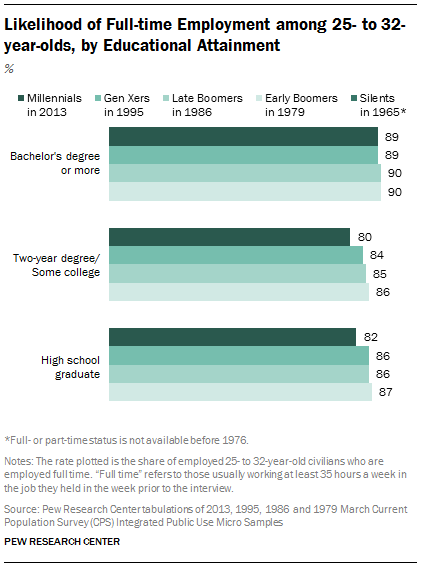 These numbers show that folks of all education levels are having a little harder time finding work. But in 2013, 89% of four-year degree holders had full-time gigs. Among the two-year/come college crowd, that success rate was 80%.

Of particular interest is the fact that Pew found mere high school grads enjoying a tick or two more full-time employment than their two-year/some college counterparts.

Now don't get too excited: that "two-year/some college" category includes both two-year degree completers and kids who major in beer before dropping out with no paper in hand. Break those subgroups apart, as David Leonhardt did for the NYT Upshot last May, and you find those two-year achievers outperforming the beer-flavored dropouts. But even the figures Leonhardt gets from the Bureau of Labor Statistics show higher employment among four-year degree holders than vocational two-year degree holders.

If the Build Dakota Scholarships are meant to encourage high school graduates who would otherwise forgo further education to get a vo-tech degree, then they are a good idea. But if these scholarships are targeted at students deciding between vo-tech and college degrees, they are enticing students toward significantly lower earning potential and slightly lower employment possibilities.