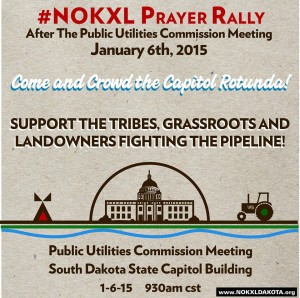 Session doesn't start until January 13, but dedicated citizens will be heating up the Capitol next week with a rally against the Keystone XL pipeline.

Oceti Rising and Dakota Rural Action are holding a #NoKXL Rally on Tuesday, January 6. They invite all interested citizens (and all citizens should be interested!) to the Public Utilities Commission hearing that starts at 9:30 a.m. in Room 413 of the Capitol. After hearing twelve electrical service territory boundary requests and Northwestern Energy's 20% rate hike request, the PUC will turn to the Yankton Sioux Tribe's motion to dismiss TransCanada's application for re-certification of its Keystone XL permit. As I reported on December 8, the Yankton Sioux Tribe contends that a "Tracking Table of Changes" submitted this fall by TransCanada with its application includes 30 modifications that render the proposed pipeline a different project from that which the PUC permitted in 2010. The tribe thus argues that TransCanada must apply for a whole new permit and submit to a whole new lengthy permit process.

On Monday, Dakota Rural Action and the Standing Rock and Cheyenne River Sioux Tribes filed motions to join the Yankton Sioux Tribe's motion, while the Rosebud Sioux Tribe filed a similar motion to dismiss. TransCanada contends the tribes' argument is illogical; things change, Keystone XL can still meet the permit conditions, and the tribes cite no law, statute, or case law to back their argument. PUC staff attorney Kristen N. Edwards recommends the PUC deny the motion to dismiss, saying that the significance of the listed project changes is better determined in discovery and the evidentiary hearing later this year.

Win or lose before the PUC Tuesday morning, the NoKXL Ralliers will have a prayer rally in the Capitol Rotunda after the hearing.