A million things are happening, yet I am sad to distraction over the death of one actor. Quite human, Mr. Spock would say, and quite illogical. 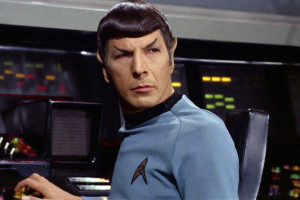 The man who brought Spock to life, Leonard Nimoy, died today. He played one famous role, enjoyed a variety of other artistic passions, and got four memorial posts in the New York Times and a statement on his passing from the President of the United States. Much poorer lives have been lived.

As far as I know, Leonard Nimoy never visited South Dakota*, never influenced the direction of our fair state. But he influenced me.

Star Trek was the most influential text of my youth. Nimoy's Spock was the most influential character in that text. Nimoy's Spock represented the person whose logic and intellect made him an outsider. He insisted there must be a logical explanation for everything, some machine or mischief behind every pretend god. Spock helped me make sense of who I was and who I wanted to be. (If I were more given to introspection, I might nail down more accurately to what extent Spock and Star Trek shaped me and to what extent Nimoy's and Gene Roddenberry's art resonated with a character already formed.)

Leonard Nimoy gave depth and soul to his Vulcan. Subsequent portrayals of Vulcans on television seemed merely cross. Zachary Quinto gets his big-screen alternate-timeline Spock better. Maybe Nimoy had and Quinto has an advantage over other Vulcan portrayers: Spock is half Vulcan, half human, an ideally conflicted character for actors, viewers, and readers alike. Along with Nimoy, we got to explore an alien soul struggling with his own profound internal conflict, yet subordinating that personal conflict to devote his strength to helping sometimes resentful, xenophobic others survive and resolve great external battles.

Nimoy brought out that conflict. Nimoy made Spock more than interesting; he made Spock a literary character worth talking about. He used Spock to help explain to a biracial teenage girl how she could deal with not fitting in with white or black society. He made Spock a character who spoke to real-world problems (that's a big part of why literature matters). He made Spock an icon of humanity who was not human.

Leonard Nimoy made good art. Leonard Nimoy is no longer with us to make that art. Nimoy's performances made our culture richer; Nimoy's passing leaves us poorer. To praise the former and mourn the latter is logical.

p.s.: Leonard Nimoy was not so serious about his art that he could not make fun of it. His 2013 tag-team Audi ad with Zachary Quinto nicely spoofed their movie stardom (and Nimoy's singing):

pp.s: Within his Star Trek oeuvre, Leonard Nimoy was perhaps proudest of his work directing Star Trek IV: The Voyage Home—you know, the one with the whales. In NPR's report on his passing, Neda Ulaby notes "Nimoy was proud of the film's environmental message and that this was the only Star Trek movie that did not involve weapons or even villains." The director's favorite Star Trek movie solved problems of our own making with brains and courage, not phasers set to kill bad guys and bogeymen. Think about that, gun-crazy South Dakota legislators.

*Update 09:25 CST: Nimoy was here! Owen Reitzel comment-links KELO's obituary, which includes a clip of a TV interview with Nimoy in Sioux Falls in 1981.