But you don't need this poll to tell you that Madville Times is the stronger blog. You want to know which candidates are recognized as the strongest. 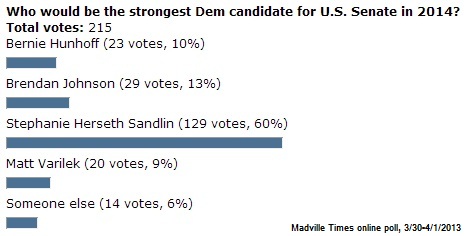 60% of you think SHS is the strongest candidate we Dems could field for the Senate race. On name recognition and likability, SHS at this point is probably the strongest candidate we could field for any race. U.S. Attorney Brendan Johnson, son of the retiring Senator Tim Johnson, comes in at 13%, just barely ahead of my suggestions of state Rep. Bernie Hunhoff at 10% and Johnson staffer Matt Varilek at 9%. "Someone else" drew only 6% interest, with one commenter submitting the name of attorney and former state legislator Margaret Gillespie.

Rep. Hunhoff tells WNAX he's not interested in running for U.S. Senate, but hey, we've got eleven months to work on changing his mind. If he does change his mind, Bernie can always note that WNAX ran that story on April 1.

Now what about the Republicans? You like former governor M. Michael Rounds, but not as much as you like Herseth Sandlin: 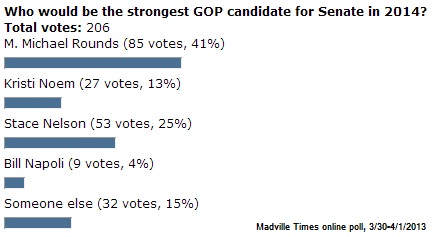 Rounds gets 41% of the vote here, again not a surprise given his likability the fact that he's the only announced candidate for Senate. The surprise in these numbers is second place. One in four of you think state Rep. Stace Nelson would be the strongest candidate the SDGOP could field to take Tim Johnson's seat. 25% for the Fulton Fulminator—that's almost double the support for aspiring Fox News personality and U.S. Congresswoman Kristi Noem. Our rodeo queen can't even beat "Someone else," who polled 15%. (One name not polled and suggested for that category: state Senator Larry Rhoden.) Former Rapid City legislator and radical right-wing option Bill Napoli draws only 4%.

As usual, the margin of error here is slightly larger than the big bend in Highway 81 near Kristi's house, so use these results at your own peril. But if these results say anything, they paint an interesting picture of the subset of South Dakota voters reading this blog. Despite my vocal criticism of Stephanie Herseth Sandlin for her Blue Doggery on the Patient Protection and Affordable Care Act, credit card reform, cap and trade, and other issues, she remains popular with the Democratic base that one would assume is reading this blog. As for the Republican choices, this blog apparently has a fair contingent of Main Street moderates who recognize Pierre's pearly-white insurance salesman as the sensible pick for Senate... but right alongside them we have some fire-breathers and mischief makers who'd love to see Stace Nelson on the statewide stump. That's a fascinating mix!