Governor Dennis Daugaard spoke about South Dakota's troubled EB-5 visa investment program, the failed Northern Beef Packers slaughterhouse, and the federal investigations thereof in an interview with SDPB's Karl Gehrke yesterday. Gehrke opens the topic of Northern Beef Packers around 20:40 in the interview. Daugaard said the plant was a good idea, explained on the EB-5 program, then maintained the state's position that no one violated any state rules in the diversion of $550,000 from former Governor Mike Rounds's one-million-dollar Future Fund Grant #1434.

Here's my transcript of his relevant comments, starting at 24:00:

...the state made a million-dollar Future Fund grant contingent upon them proving that they had spent at least a million dollars on certain equipment that had been purchased and installed. Northern Beef Packers produced the receipts to prove yes they had spent the money on the equipment that had been purchased and installed, and so the million dollars was then paid to NBP [Governor Dennis Daugaard, interview with Karl Gehrke, Dakota Midday, South Dakota Public Broadcasting, 2014.01.16].

Pause: Did those receipts add up to one million dollars? Gubernatorial spokesman Tony Venhuizen confirmed to me after the Governor's interview that on January 5, 2011, Northern Beef Packers CEO David Palmer provided to the Governor's Office of Economic Development a set of bank statements, wire transfer records, and canceled checks showing that NBP had indeed spent over a million dollars on equipment and on construction costs qualifying it for the Future Fund #1434 payment. (Governor Daugaard only spoke of "equipment" in yesterday's interview, but FF grant #1434 includes language about "construction costs.") Here is that e-mail, redacted by the state to comply with "confidentiality laws relating to commercial and financial information provided by grant recipients, such as SDCL 1-27-1.6(4) and SDCL 1-16G-11": 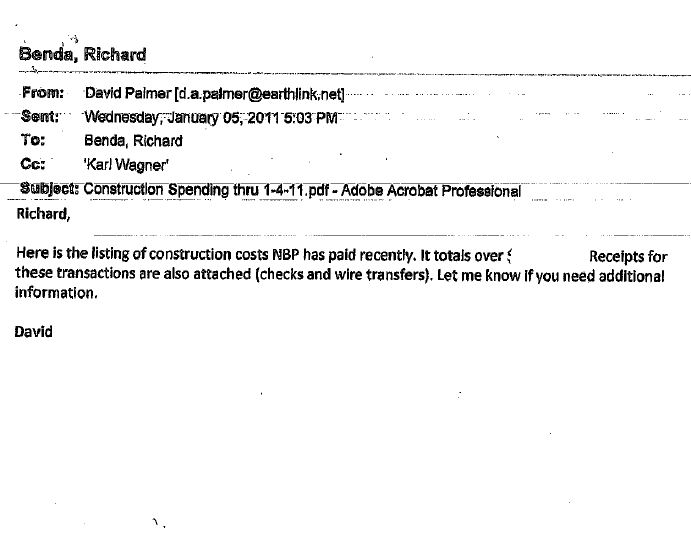 We don't get to see those receipts, but Venhuizen says the Governor's Office of Economic Development has them. Auditors, we look forward to your verification of those receipts.

Governor Daugaard explains what happened to that million-dollar grant and emphasizes that the state and Northern Beef Packers did nothing wrong with Future Fund grant #1434:

NBP then shortly after that spent 550K on a contract with SDRC, which employed a former state employee, Richard Benda, to oversee the loans that were made by the entities created by these EB-5 investors.

Now was that wrongful? I guess we won't know whether that was wrongful in the sense that there won't be, since Richard Benda has died, there won't be his testimony available and... I don't... if there was a federal investigation targeting him, certainly that part of their investigation will no longer be able to pursue him. So it's hard to know whether that was a misappropriation of the grant that was correctly awarded, because again, that equipment had been installed and the receipts were there. Now how NBP uses that million dollars once its theirs, its up to them to decide.

So, I think this is the controversy that first made people curious, you know, what is going on when this million dollars is followed very shortly by this commitment to SDRC to hire Richard Benda [Daugaard, 2014.01.16].

One small correction: The controversy that first made people curious was Richard Benda's unusual suicide, and the state's unusual delay in declaring it a suicide. People then got even more curious when the Governor's office announced the ongoing federal investigation into Benda, EB-5, and other grand-jury subpoenaed subjects about which we have not yet been told. The Attorney General's announcement of the Future Fund diversion and Richard Benda's travel-expense double-billing only fanned flames of curiosity that were already burning.

Daugaard then turns to that double-billing. He admits that feds, not the state, uncovered that activity, and tells us the state will try to get that money back:

So that was clearly either a mistake or a wrongful intentional act, and the state is going to try and recover that money from Benda's estate [Daugaard, 2014.01.16].

Daugaard opens and closes his discourse on Northern Beef Packers by saying that the plant failed due to a "shortage of capital." He says NBP's planners underestimated how much it would take to get such a large operation running profitably. But if NBP's organizers were simply mistaken, then so was the state, and so were 160 EB-5 investors, who sunk money into a bad business plan that some would argue was destined to fail.