Hey, Pressler Democrats! Does this flyer help pull you back to Democrat Rick Weiland? 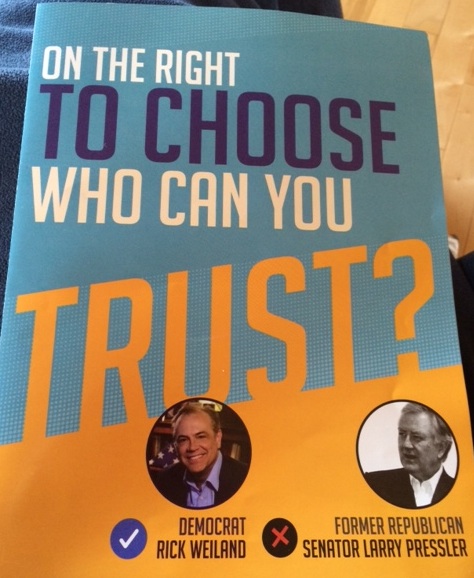 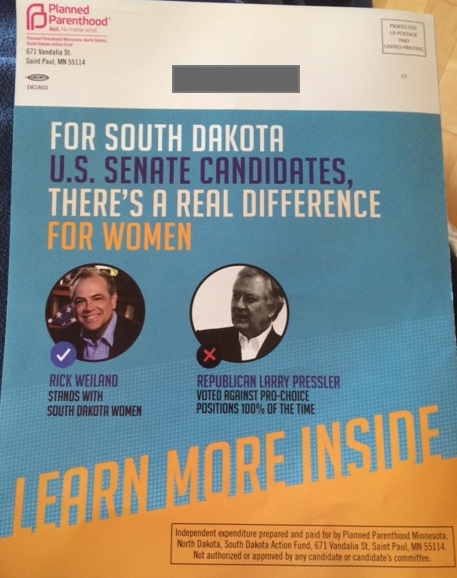 Planned Parenthood MN-ND-SD's PAC has been filling South Dakota mailboxes with this mailer. Planned Parenthood has also put up ChooseWeiland.com to remind pro-lady Dems that Weiland supports their values better than Pressler. The pros for Weiland:

We need leaders like Rick Weiland who will protect our right to make private medical decisions without government intrusion.

Rick will protect funds for lifesaving pre-cancer screenings and mammograms for millions of women and will fight against any attempt to defund Planned Parenthood.

And the Pressler cons:

Voted 100% against the Pro-Choice Position

Former Republican Senator Larry Pressler voted against the pro-choice position 100% of the time.

Former Republican Senator Larry Pressler said he probably would’ve voted against the legislation which has expanded life-saving preventive care to millions of women without a copay [links mine; ChooseWeiland.com].

One pale yellow flag: on preventive care, we're talking about the Affordable Care Act. (Preventive care with no copays—yeah, remember that benefit that Mike Rounds and Kristi Noem would repeal?) Yes, Pressler did say that, had he been in the Senate in 2010, he'd have voted against the ACA. But he has also said that the ACA is the law of the land, that repeal is unrealistic, and that we should work to make the ACA better. That puts Pressler somewhere in the neighborhood of where Stephanie Herseth Sandlin stood in 2010. Of course, Stephanie Herseth Sandlin didn't have to run against a Weiland....

So Dems, if you're still thinking of making Mike Rounds Senator by voting for Larry Pressler, does the pro-choice issue swing you back to Rick Weiland?