Daugaard Stumping for Tom Nelson in Spearfish Tuesday, May 22

We generally expect Republican and Democratic party officials to avoid endorsing candidates in the primaries. South Dakota GOP bosses were careful not to speak up for Mitt Romney until his main challengers quit. 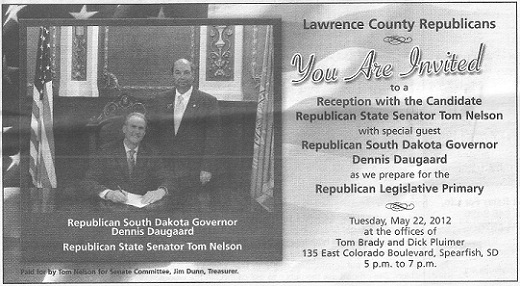 O.K., o.k., the ad on page 7 of Friday's Black Hills Pioneer doesn't say the Governor is actually endorsing Senator Nelson. And it certainly doesn't say that this campaign stop has anything to do Senator Nelson's water-carrying* for House Bill 1234, the Governor's embattled education reform package which faces a likely referendum this fall.

Senator Nelson's campaign calendar says this reception at the offices of Tom Brady and Dick Pluimer, 135 Colorado Blvd., in Spearfish, is "for the GOP Primary, but everyone is welcome." I wonder if that includes Nelson's fellow incumbent campaigner Rep. Fred Romkema, who joined six other Republican House members in changing his mind and voting against HB 1234 at the end of the Legislative session.

I also wonder if that includes bloggers. I better make sure I finish grading those French exams! I love GOP hors d'oeuvres.